Traditionally, when we have wanted to think about our relationship to nature, we have gone to the wilderness, to places untouched by man.
... I think this is unfortunate... Americans [and Australians too] have a deeply in-grained habit of seeing nature and culture as irreconcilably opposed; we automatically assume that whenever one gains, the other must lose.
Michael Pollan

I walked past a front yard in Melbourne last week with a poster stuck in the middle of dead dead nothing in front of the house. The poster read: "This time I'm voting for The Greens". Sort of exemplifies the problem set out by MP. It should be easy to be green, even if renting. Read this and swoon. 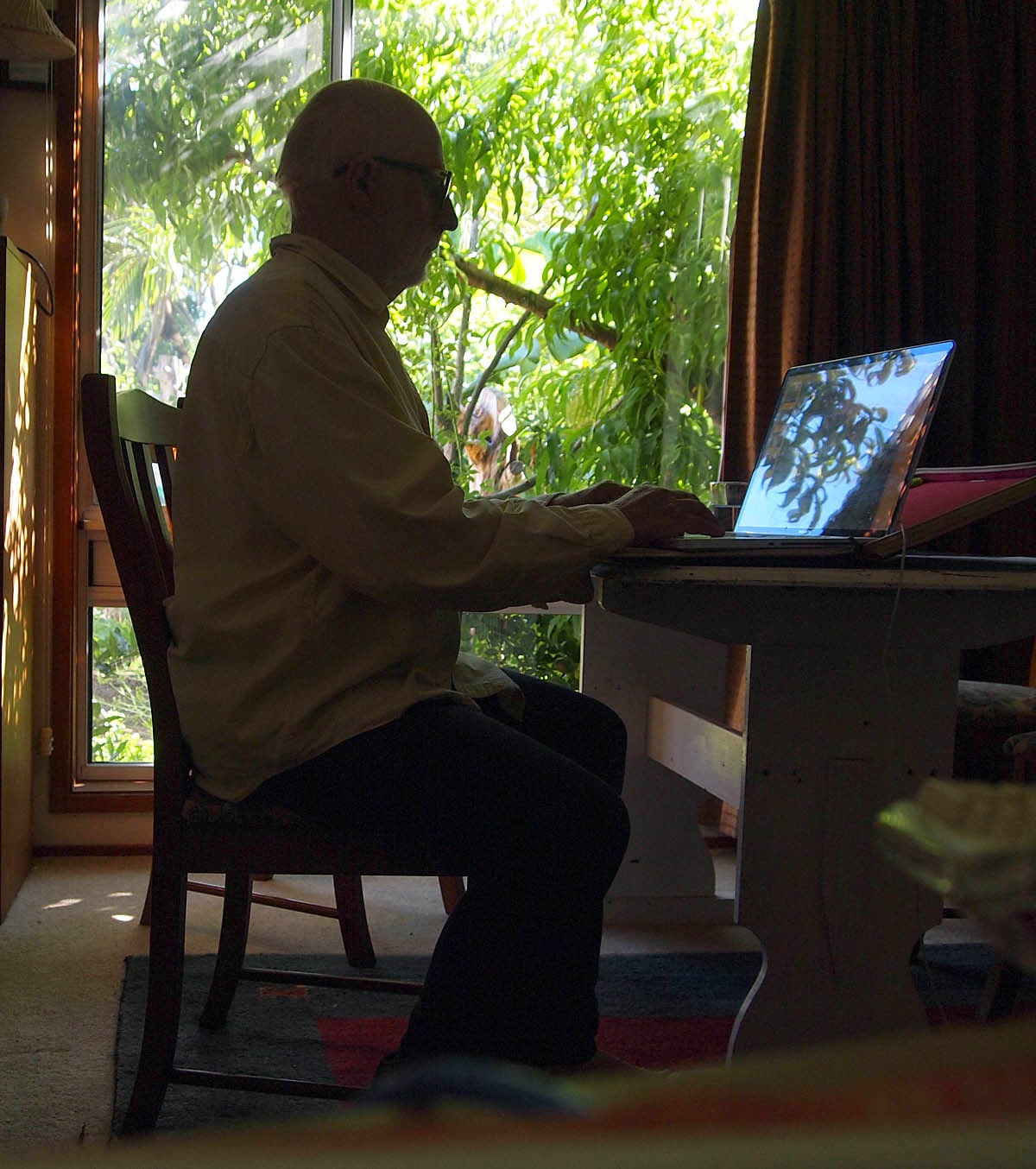 No longer a north-facing warm winter sunroom to work in, the new growth of peach and rose make this a shady room.

These first two photos point to an underlying principle (or cluster of 'em) around the necessity that a suburban food forest enhance the human species, with its needs sybaritic, comfortable and comforting, inspiring and cheerful, as well as practical. We are in the garden, the garden gets in us.

Earlier, at the back of the house, the bedroom french doors that I installed in place of a window in 2013 extend human morning coffee life out into the garden. I pick up the camera after harvesting rhubarb for dessert later. While Helen dreams... 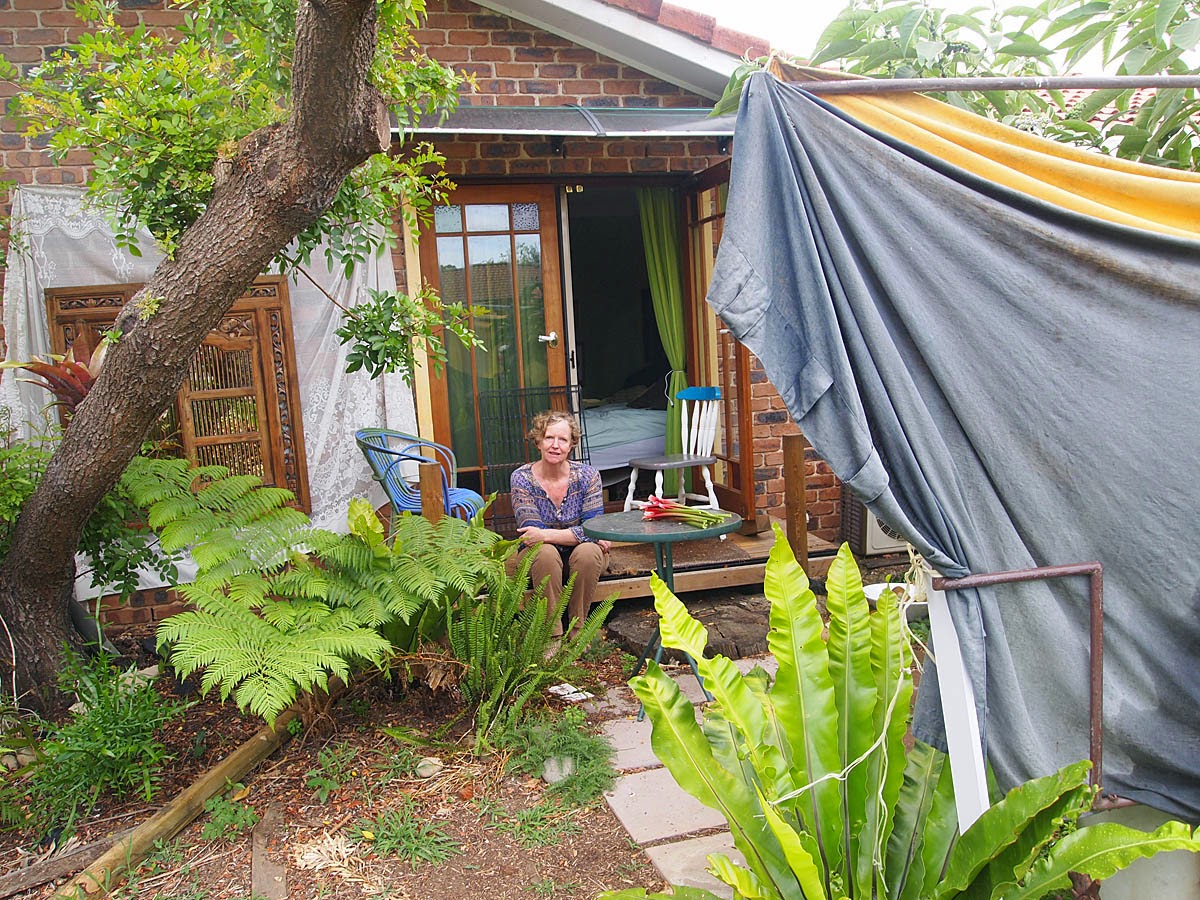 I was slightly alarmed to encounter the seemingly protestant ethic driven website 100kilos.org with its invocation that every Australian family should grow 100kgs of food per year. I suppose if I grudgingly give space to pumpkins we'd be there in a flash, though they take so much space so boringly, but when I look at my raised bed of spinach and 'lawns' of herbs I think I focus more on quality than weight.


And then I lift my eyes to the fruit forming on tamarillo and fig and lemon and orange, guava and passionfruit and realise we will rush past the 100kgs without lifting one potato.


Which brings us to the other garden producers, the chooks ('chooks' is a non-gender Australian word to include hens, roosters, chickens).

These three young hens, or pullets, are only five months old, so they will not produce eggs for some time. But they are already an important part of the garden. Their digestive systems will take in weeds and scraps and snails collected the night before. Their digestive systems produce a product of enormous value, which we put through the compost rather than use directly on the garden.
And dare I say, these three young women – Ancona (black and white), Livorno (top-left: the rare golden-salmon colour) and (foreground) x-breed Hairy Legs (you might see the patchy hairy legs if the photo is enlarged) – add class to our establishment: they can be admired and praised and are more entertaining than most television. We had brought them in in the dark of night some weeks ago, to join two elderly dames, generally if you put hens together in the dark on a perch they work things out in the morning without too much fuss. But the elderly dames went beyond establishing pecking order, persisting for days in slashing and wounding... which earned them an early place in the compost.

Violence. There is necessarily violence at various levels in the garden. We get more fidgety about violence between and towards animals and birds, though somehow relaxed about violence towards innocent plants that can't run away... To garden is to intervene in nature, to shift the ecology from nature's outcomes to things that serve us.

Chemical farming tends to ignore the soil and add chemicals to directly force feed plants while neglecting the soil, then to bomb with poisons. Natural farming ensures the soil continues to improve and plants thrive on good nutrition. And within the notion of natural farming there is considerable variation, from orderly regimentation with regulation of inputs to a slithering in to be somewhat in nature, with minimal distortion. Dig deeper here, in Masanobu Fukuoka's One Straw Revolution.***

Which brings us back to the 100kgs question. There is more to our kind of gardening than that nice objective. But please go see them... they seek to assemble lots of practical ideas.

I go back to Fukuoka, as quoted in the right column here:


The ultimate goal of farming is not the growing of crops but the cultivation and perfection of human beings.

It's challenging to read and try to follow that, it has a zenly quality. But it works. And bears fruit.


....among natural farming methods two kinds could be distinguished: broad, transcendent natural farming, and the narrow natural farming of the relative world [this is the world as understood by the intellect]. If I were pressed to talk about it in Buddhist terms, the two could be called respectively as Mahayana and Hinayana natural farming.

Broad, Mahayana natural farming arises of itself when a unity exists between man and nature. It conforms to nature as it is, and to the mind as it is. It proceeds from the conviction that if the individual temporarily abandons human will and so allows himself to be guided by nature, nature responds by providing everything. To give a simple analogy, in transcendent natural farming the relationship between humanity and nature can be compared with a husband and wife joined in perfect marriage. The marriage is not bestowed, not received; the perfect pair comes into existence of itself.

Narrow natural farming, on the other hand, is pursuing the way of nature; it self-consciously attempts, by "organic" or other methods, to follow nature. Farming is used for achieving a given objective. Although sincerely loving nature and earnestly proposing to her, the relationship is still tentative. Modern industrial farming desires heaven's wisdom, without grasping its meaning, and at the same time wants to make use of nature. Restlessly searching, it is unable to find anyone to propose to.

Posted by Dennis Argall at 3:09 PM