..into autumn: sobbing after a death, lots of rain, pecking orders

An Indian friend commented on how wonderful the weather looked in my first blog entry, with the baseline photos. It was indeed beautiful, with mild temperatures, though with only very scattered showers, the ground was starting to dry. I was pleased to see that there was (according to my inserted finger) good soil moisture in the raised bed gardens.

With a rush, the cooler weather has arrived. First with misty mornings, in this photo from in front of my house you are not looking at snow but at fog falling off the nearby hill early in the morning. 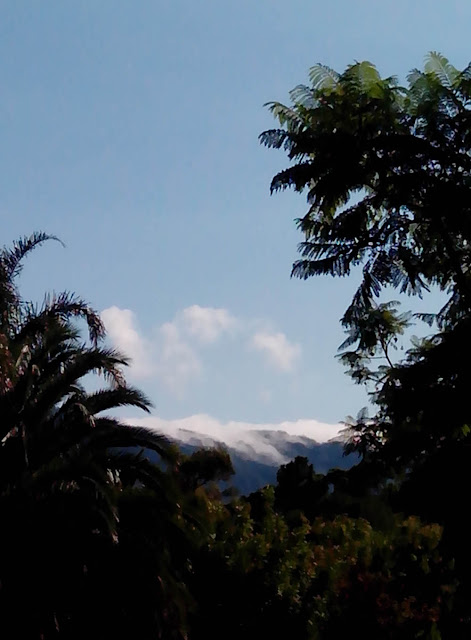 Now, suddenly, cold weather whirling in from the sea, and early yesterday 80mm (over 3 inches) of cold hard rain.

I have been away and yet to see if any damage from the heavy storm. In any case a good follow-up: the day before I had planted seeds of rocket and snap peas in the garden and raised bed, and brussels sprouts in a seed tray. Of these, the rocket my own collected seed, the other purchased. I hope to use a higher percentage of own seed over time.

That day, Friday, was marred by hearing, as I went into the garden, sounds of weeping from the chook house. Where I found one sobbing hen beside the other of two, cold and dead below perch. The deceased went into the compost (my experience of this is that the hen vanishes completely over a time as worms multiply). The compost is closed to all but air.

The survivor was very much alive and spent the day sobbing and digging. I can only describe it as sobbing, it was different from usual clucking sounds. She dug as if possessed, perhaps heading for China. This was, to me, something in the way of evidence [a] that chooks have feelings [b] that chooks have memories which last longer than 5 seconds.  See this wonderful article about these clever creatures.

I went to the excellent produce store in town and bought two cross-Leghorn (the English 'grand tour'-ists could not pronounce the name of the Italian city of Livorno, so town and the local gracious chooks get to be Leghorn in English). See Wikipedia. These birds bred by the store owner. They may not produce as many eggs per year as the Isa Brown they replace (also available in-store), but the egg productive Isa Browns are relatively short-lived and unfortunately if they take in too much protein they can produce eggs of a size that get stuck in the cloaca. I did not perform and autopsy to check that (I have done so in the past, it provides a view of the succession of eggs growing in order, eventually when full -size each egg given a shell, in the tubework inside) but there was no sign in the chook (or partner) of disease. My suspicion of excess protein mixes with some sense of guilt. I had gone into the large chook run and put a quantity of blood and bone around a banana tree and a cherimoya. To discover later that this industrious hen had had a rich feast from this fertiliser. Some people feed their chooks blood and bone, but this may have been the cause: I am not trained in stomach pumping fowl, which might well cause death if tried. And would certainly achieve a hostile attitude on the part of the chook. Chook stomachs contain lots of bits of rock, etc, for grinding what they eat. Try to remove at peril. Anyway, enough of the guilt trip...

In the afternoon I left the newcomers in their cardboard box near the chook house, within ear- and nose-shot of the incumbent, calling the latter over to hear and smell... but even with separation of heavy netting and cardboard she was standing off. I then waited till after dark, when chooks become very easy to handle, and placed the newcomers with She-Who-Will-Seek-to-Remain-Chief-Chook together in roost. I left a good supply of water and food and locked their house (photo first blog entry) so they could have a couple of days sorting out their 'pecking order'. They seem all to be of fairly gentle disposition and good health, so hopefully when I get home to see them, having been away since, they will have the social order settled without too much bloodshed or flown feathers.

As regards metaphorical pecking orders, someone reported research last week, derived from riding elevators, with findings about how men and women (at least in those buildings in Adelaide) behave in elevators. I have a spare mirror in the garden, I will have to place it among the chooks and report.

I do have a social science degree, but this kind of ephemeral stuff offers some insight into why angry conservatives acted to take money away from social science in the cutbacks to the United States budget. This piece of research, indeed much of what many students seem to have to do in the endless search for niches unresearched, demonstrates well Edward O Wilson's use of the term hypertrophy, beginning in On Human Nature 1978:

I interpret contemporary human social behavior to comprise hypertrophic outgrowths of the simpler features of human nature joined together into an irregular mosaic.

Butterfly wings, birds of paradise, the pope's getup, the curiously not-privatised funeral of Margaret Thatcher, glamorous birds in elevators in smart cities: all exhibit hypertrophy in their elaborate forms, gone beyond function to glory. My dowdy brown hen has gone not to glory but compost. The last hen to go into my compost was a barnevelder, which never was at home with the two browns. Little do they know, those who enjoy my tamarillos, how many ex-barnevelder atoms they contain.

More from garden soon. I plan news, chook pics and issue reporting.  This is getting hypertrophic... but then, I'm only human!
Posted by Dennis Argall at 9:29 AM