I have found increasingly as I crowd my suburban garden that there is more space or more spaces with different meanings and uses.

One of the difficult areas has been an eastern end of house which has tree cover, wonderful in summer, but has been very difficult to access and thus neglected. It was like this a couple of months ago: 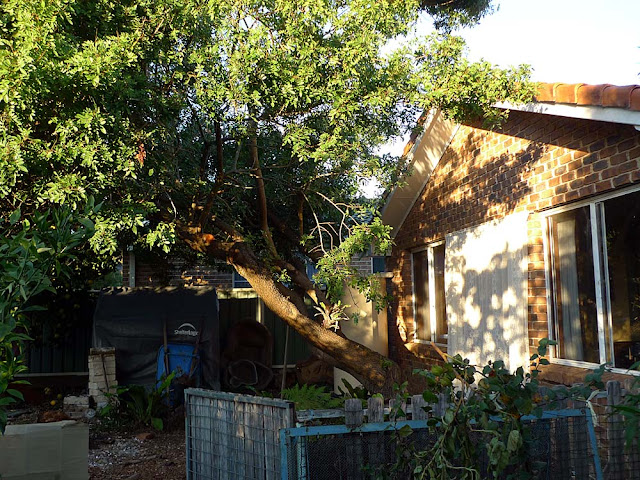 Several things came together to make change possible. I have now achieved that change by installing French doors in place of those nearest windows, removed that fence, formed a recreational space, screened against neighbours and will next work soildly (nice mistype) on what is workable sunny garden space for several metres to the left of that photo above.

We work with the scrounged and found. Or ebayed. As were the French doors. Some assistance with cutting out the windows. Then detailing by me, including making sculptable pillars from stack of Hebel blocks beside the doors, a step-out landing, some paving, etc. A slice of ancient tree trunk vomitted by the creek onto our now-sold block off the Tuross in a 2010 flood. 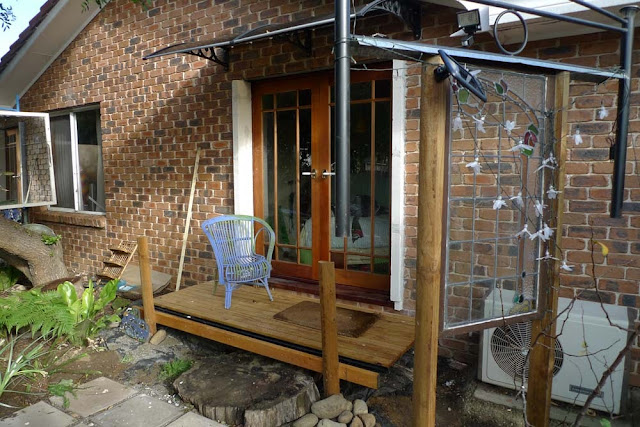 And viewed from the guest bedroom, inside that door, provision of light and air... 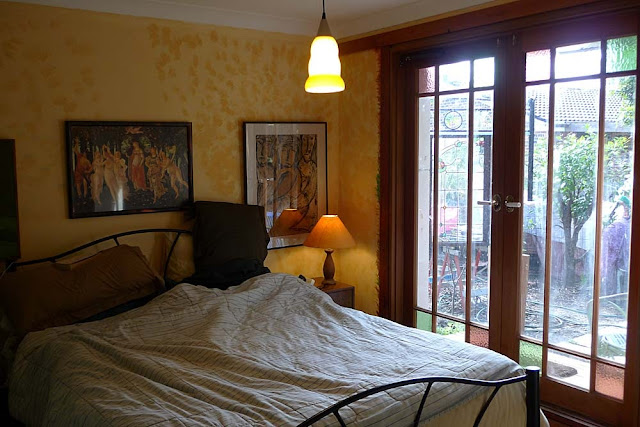 and escape to the outdoors, still a construction site: 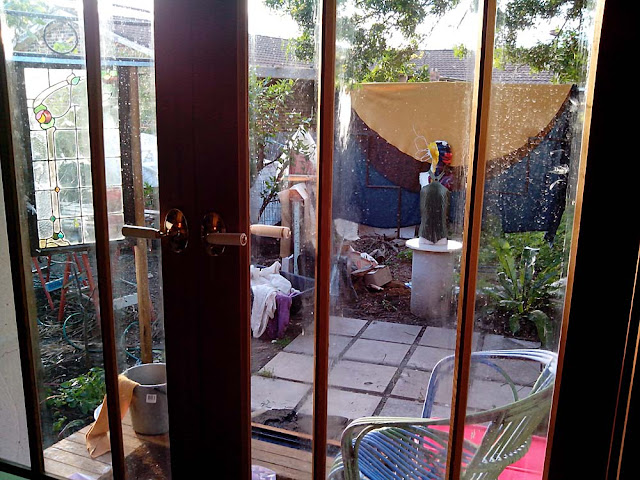 ... where I have brought together an array of materials, some found years ago, one acquired in the 1960s, badly damaged but perhaps 800 years old. She who stands guard out there, been round here and there since the 1990s, variously painted and adapted, now clad for once... who is she? Isis [see  footnote ***] 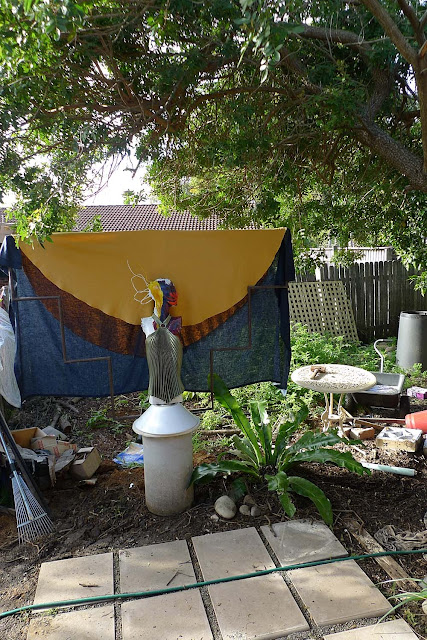 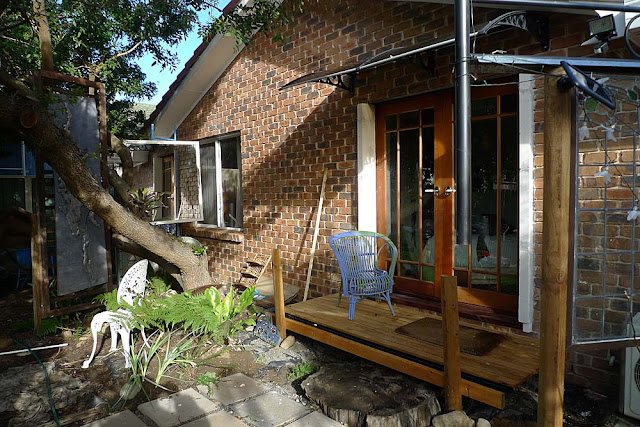 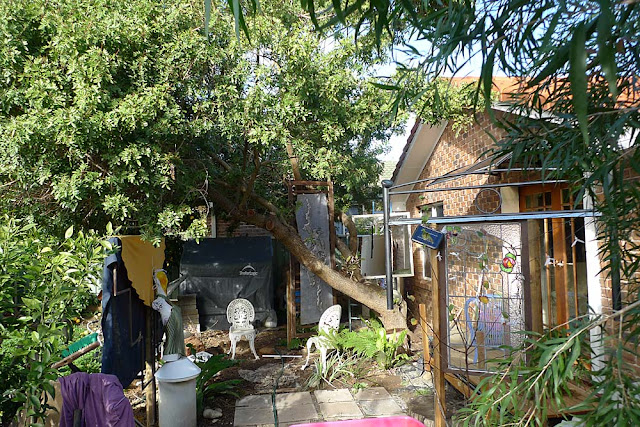 Far from finished... perhaps it will never be finished, there is enough nature around and within it to ensure evolution. The modern metallic sculptural flows are the way it happened to alloy wheels and engine block of a burned out car we discovered in May. Now inset into routed slab of paulownia harvested from former farm, in turn fixed to the front of a latticed panel of Douglas fir from the Berry tip. The mirror, edges to be painted, alters and increases light and space. The paving is 10 degrees or so off from square with the building, so rectangularity is denied conformity; unsquare. The square pavers will diminish in form as herbs grow, so far just scavengings of mint, yarrow and marjoram from other corners of the garden. All adjacent to the rhubarb mixed with iris, tree fern and birds nest fern, adding edible colour and dis-regimentation and avoidance of silly segregations. The stained glass window (farm shed/garage sale, Foxground 2010) is a rectangle making the case against rectangularity too. It catches the morning winter light; in summer the young quince tree, bare sticks in this pic above, will grow up to cast shade over and part swallow it. 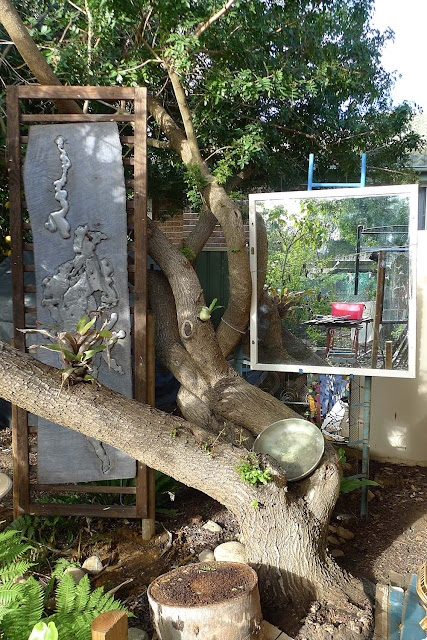 To look down is important, achieving contrasting forms... also note that the Pistacea chinensis is already in this windy spring casting down its delightful oval contribution of leaf litter.
Peaking out to the right of the violets is a false tobacco bush seedling S. mauritianum
which I removed from roof gutter above, potentially bushman's toilet paper :-) 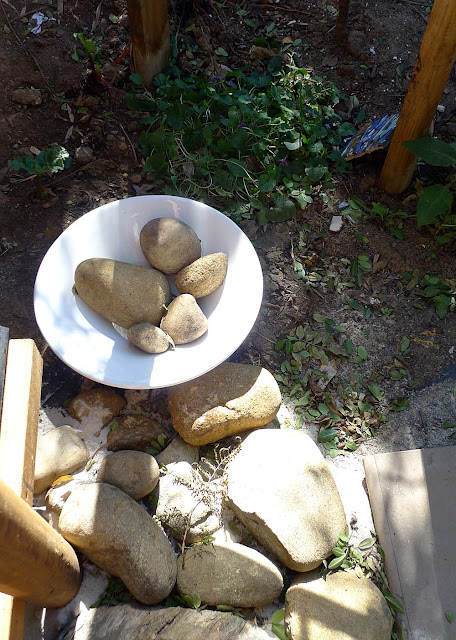 and in this photo another mirror has crept in... and morning sunlight adds more geometry 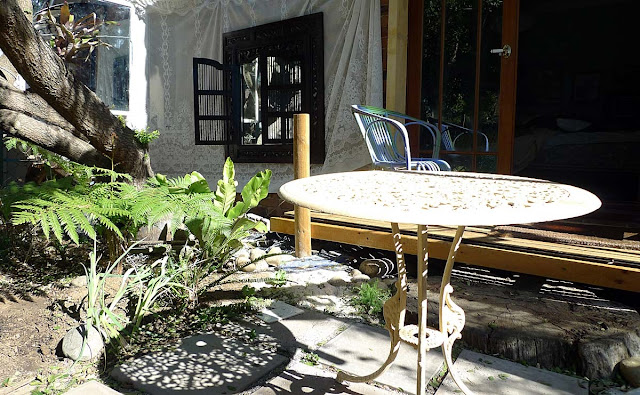 *** Regarding Isis: a very significant addition to my back yard:

With Ceres in the front garden, this omnideity Isis seems well placed in this evolving mix of built and natural out the back.
Posted by Dennis Argall at 6:09 PM