and in late summer

We have been busy during the summer, only partly in the gardens.

We had weeks of hot-dry, which killed some things, weeks of torrential rain, two events of 80mm in 30 minutes at night, with problems of flooding and mulch being washed away. But after the severe drought last summer, we have a water table restocked and we have now also sufficient plant size and sufficient humus in the top layers for the garden to have some robustness against severe weather. Into mid-February, days of very high humidity, temperatures wandering into the 30s at times, night down to about 18 or so.

There are likely deficiencies, potassium is so soluble it is probably much reduced and we need to top up to improve fruiting. I began adding volcanic rock dust several months ago and this seems to have had very good. This being in origin tired cow paddock, negligible soil, with superphosphate induced hard-pan on top of several hundred feet of porous sandstone.

To begin, when I wake to the light from the east, this is the view from bedroom's French doors. I had removed a huge weight of a large tree which hitherto shaded this eastern back garden, because there was risk of it falling and uprooting the back wall of the house. But there still remained a couple of large branches, threatening to fall over time, hence the now red coloured gate-prop to hold up the branch. 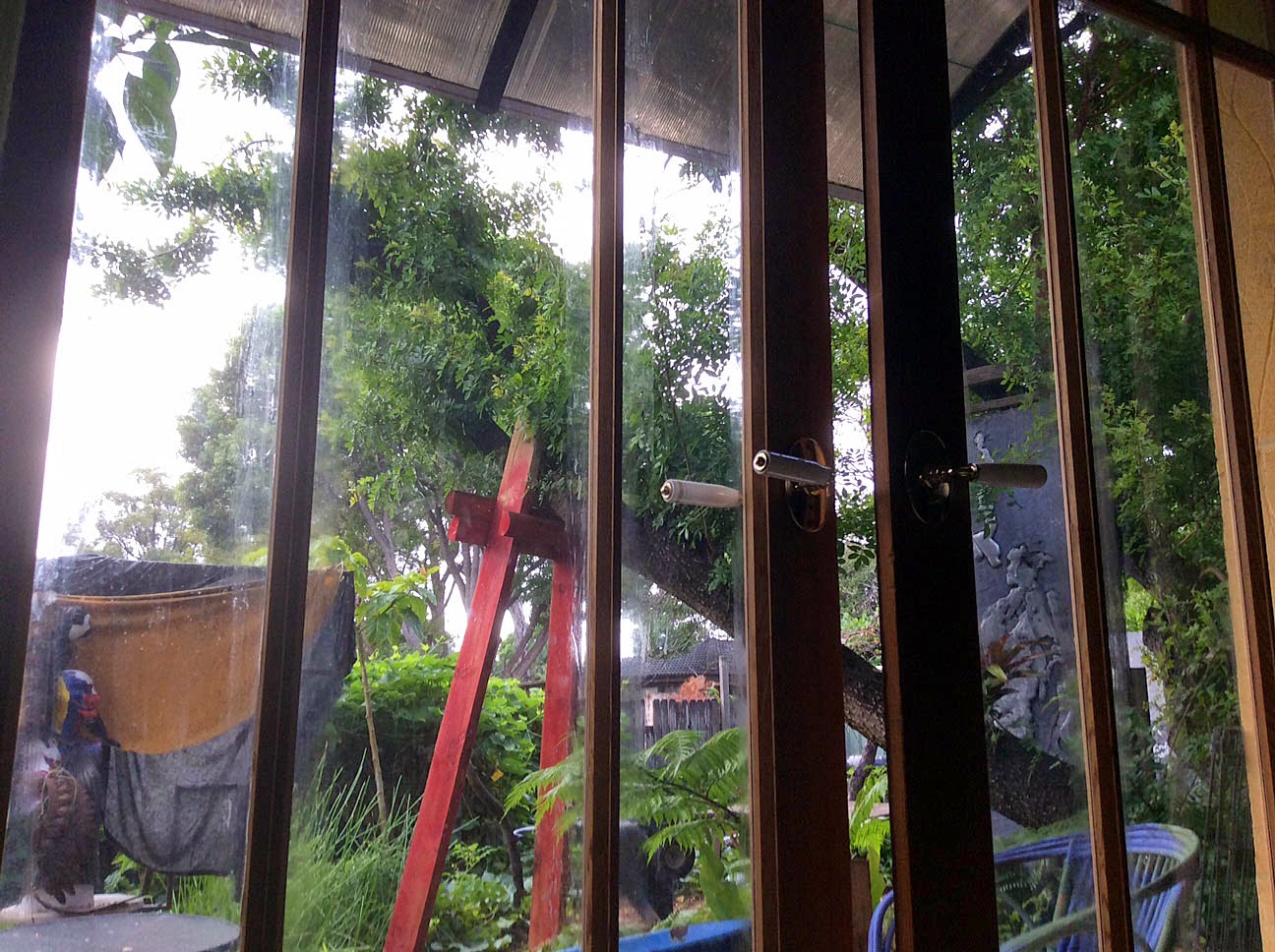 From the front, the other end of the property, you arrive here, among food production with a tiny amount of grass, mainly to tear up for chickens. The house shouts tame-ordinary, the garden however is going wild.

There are guardians. I dream of carving a crouching figure from that stump. 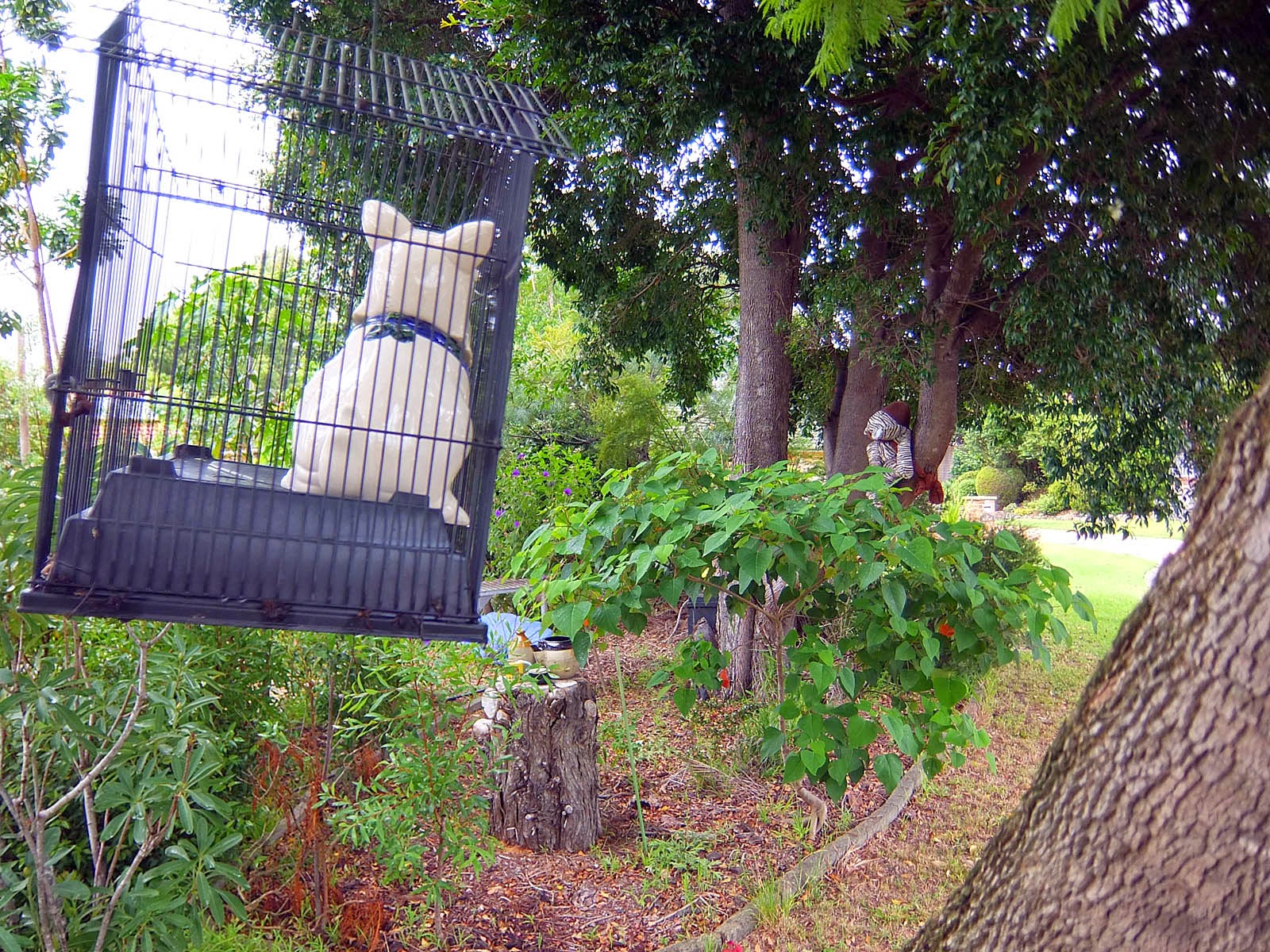 Beyond that large tree, a fruitful lilly pilly is what permaculturists have with some kind of exotic panache, begun calling a hugel bed. In early spring, when we had a lot of logs from pruning, I put these, together with seven bags of horse manure, under dark plastic, after watering deeply. Left until January, the logs are still intact, but surrounded with rich soil full of worms. Too dark for many plants, I have begun to put some rainforest items there. This is a pleasant visual barrier from the street. 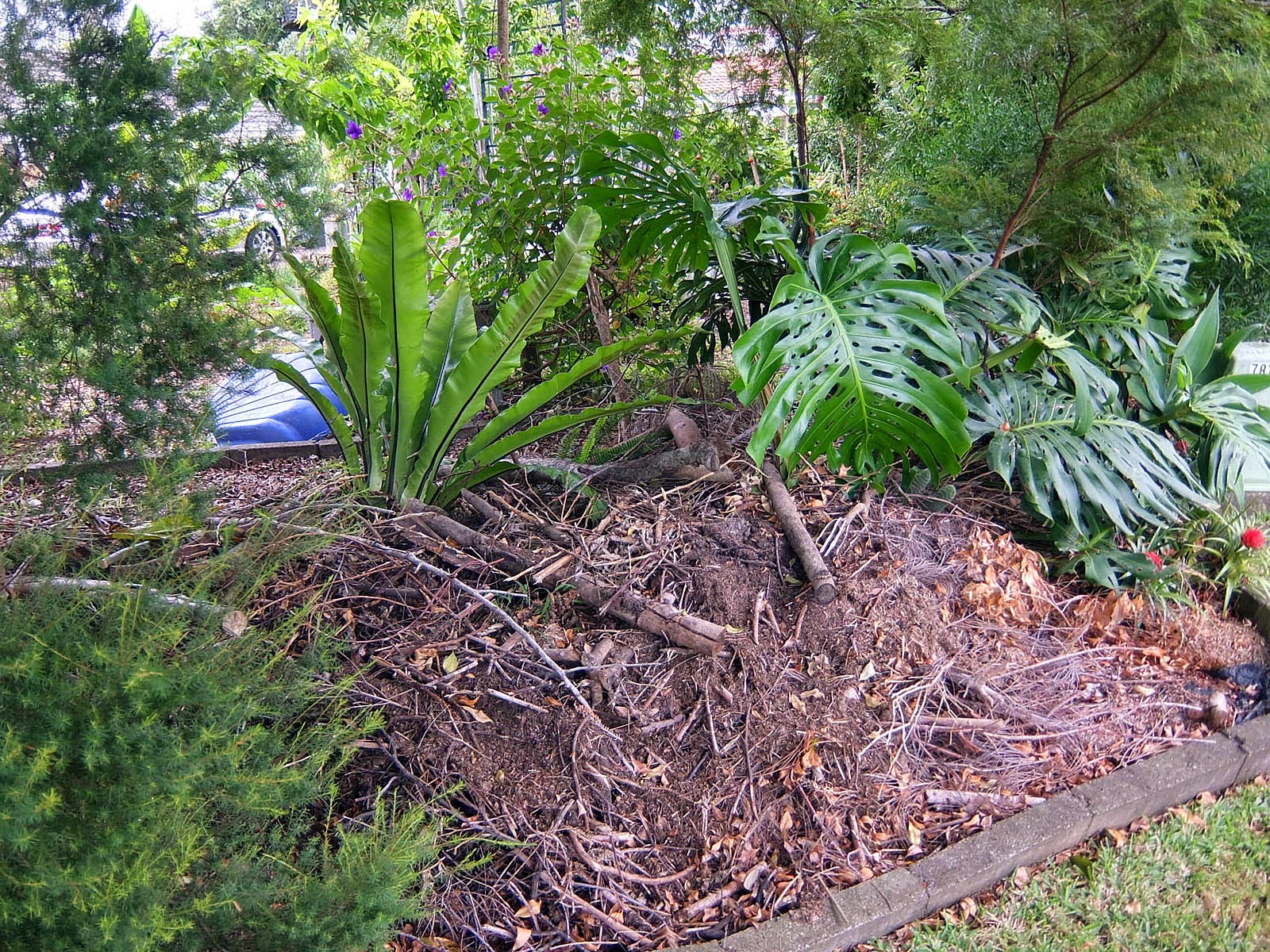 There is another small hugel bed by the drive,
with a flowering plant but also the base for a passionfruit.
This garden has summer sun but shaded in winter.
By winter I hope the passionfruit has climbed well up the trees to catch the light.
Right now the sun is intense, so as well as mulch, while these plants are very small and shallow rooted, I have also put some prunings on the top, loose and open and shading the mulch. 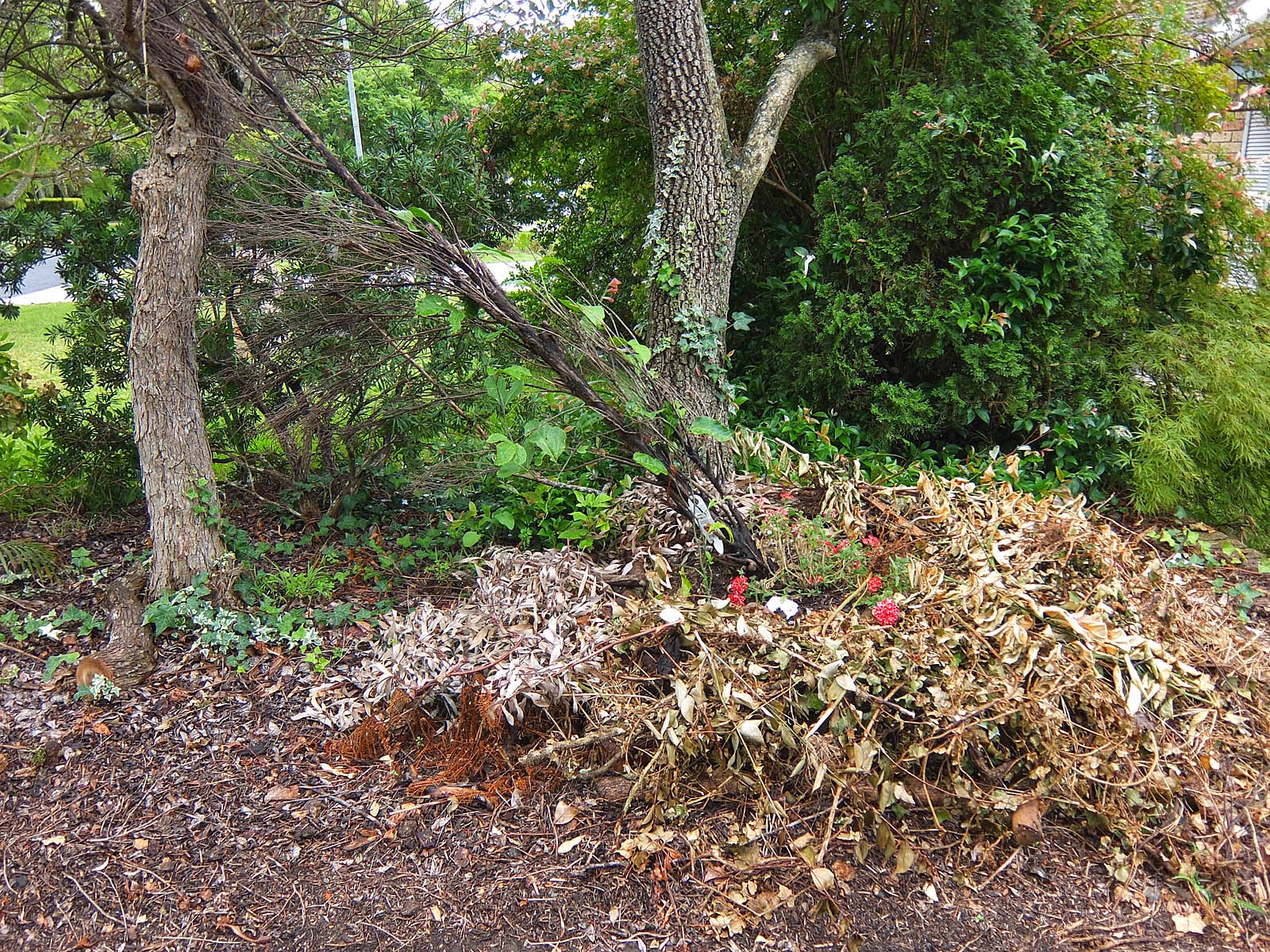 Adjacent to that is bare ground, so sun struck I thought geraniums might survive where others have failed. But having watered and deep mulched the geraniums, to my surprise a dead stick of failed tamarillo has suddenly returned to life. Tribute to rock dust, water, mulch, light, heat. 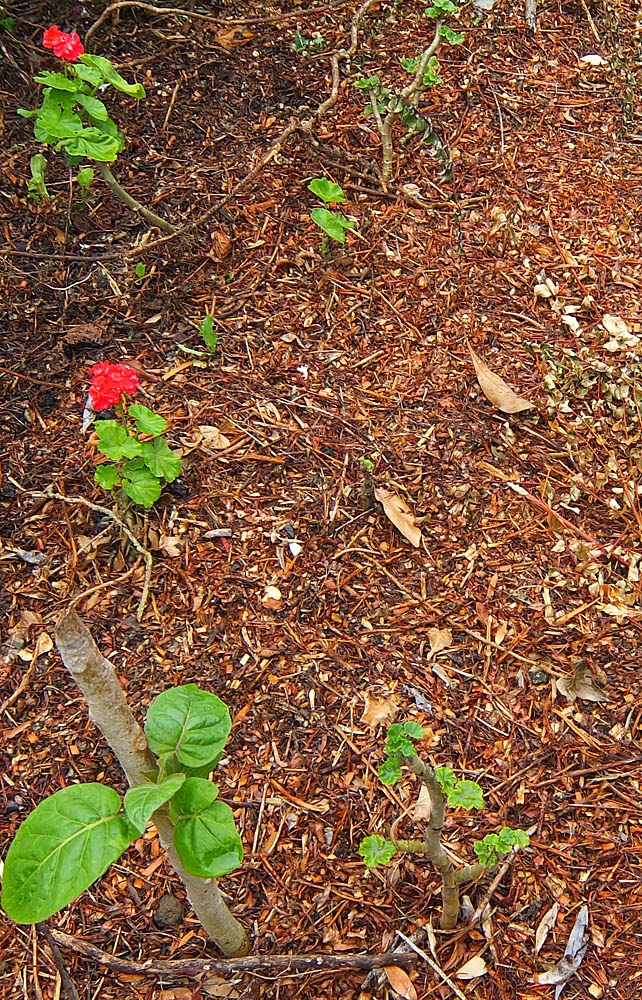 Across the drive is wider garden with full sun, a sun trap for much of the year. When I arrived in 2008 it was all grass, now deeper life. 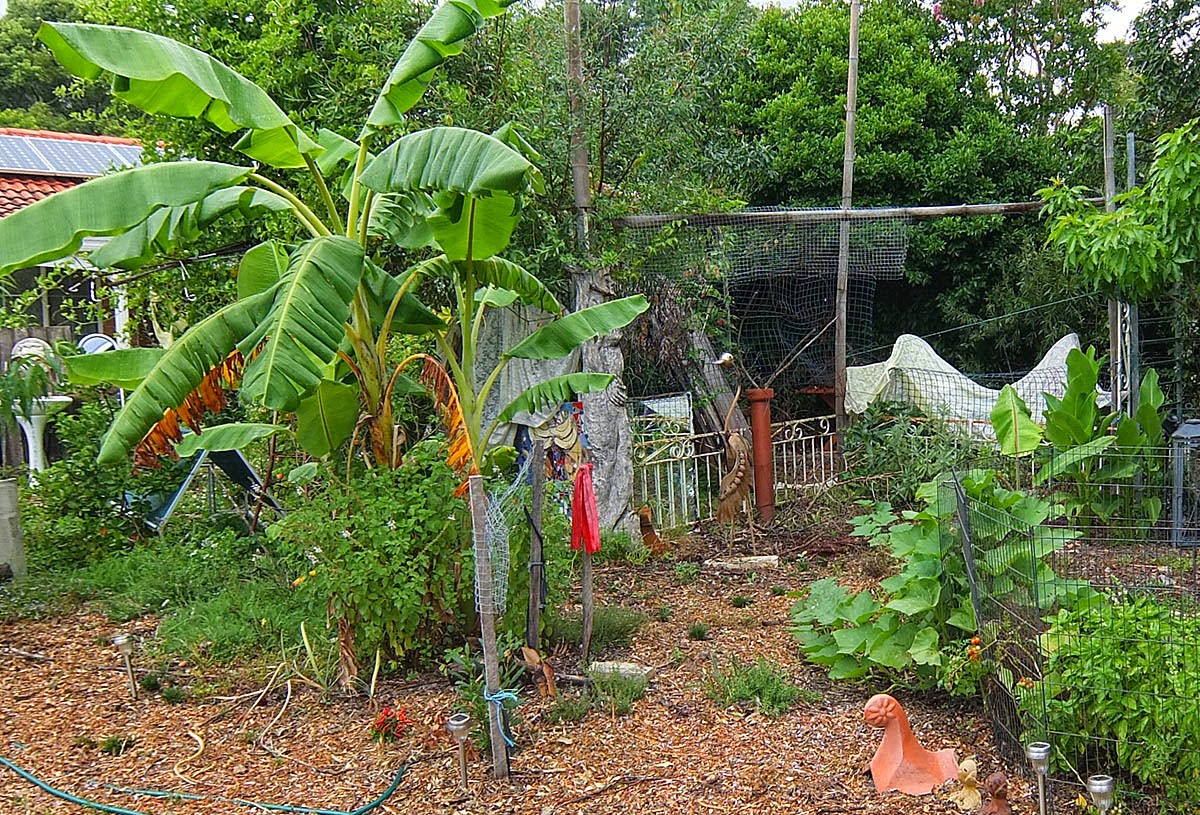 Posted by Dennis Argall at 4:11 PM