We have had much rain. Then a couple of very hot days. Late yesterday having watered heat-shocked plants we sat at the table outside Helen's kitchen window. 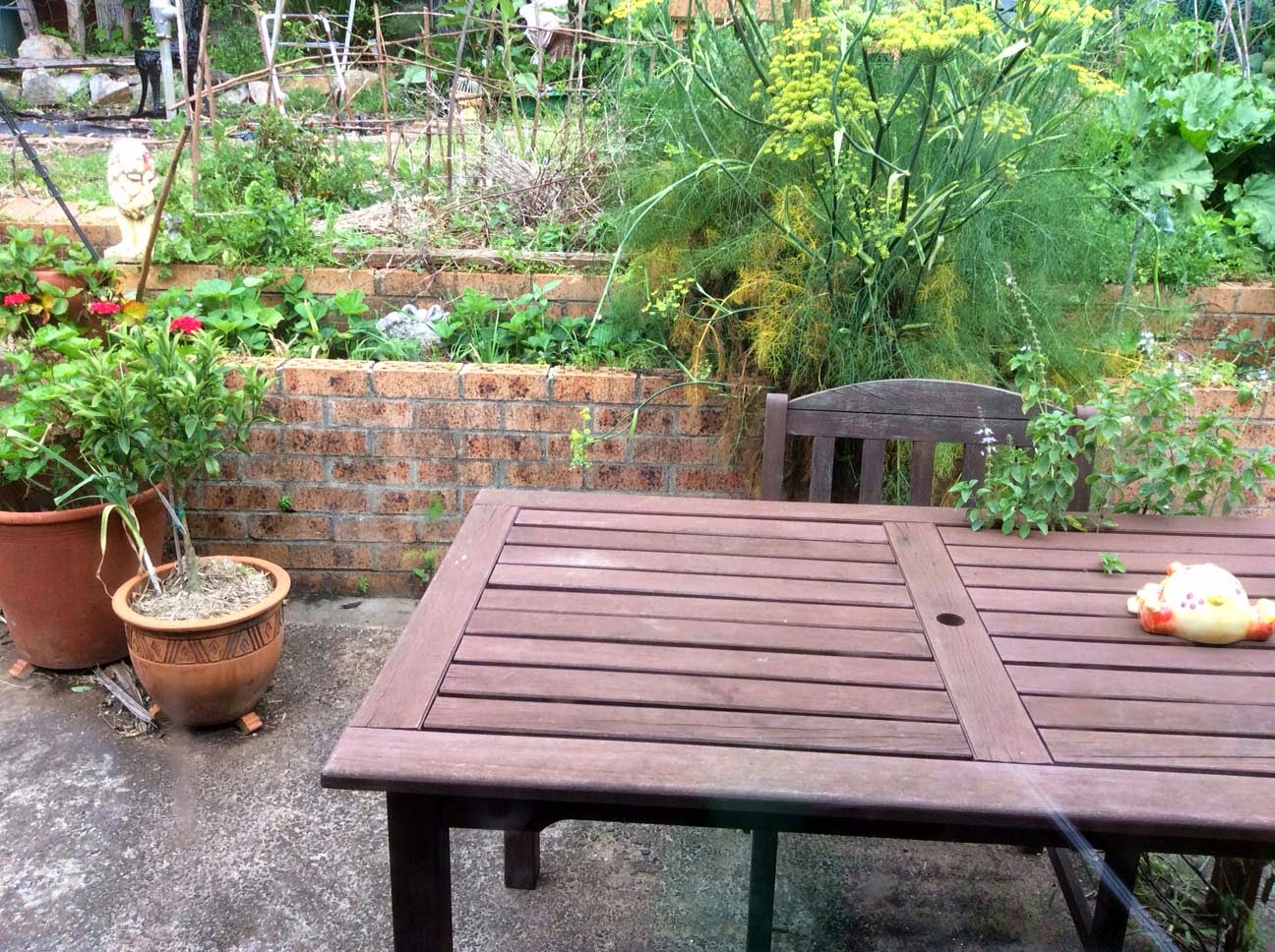 There is a black snake, said Helen. And indeed there was. Slithering up from the strawberry bed at the top of the first brick wall, up the bricks into the garden. This photo from the kitchen today, no snake... and we have not seen the snake today.

It's quite small I said, impressed by how slender it looked (about 3 or 4cm diameter.
But quite long, said Helen.

Yes, I said, perhaps 1.2 metres... we both were surprised as this slender creature continued to reveal more of its length, coming up from the strawberries. Still young, we thought.

I've hoped to have a snake in the compost, said Helen. But I had in mind a diamond python.

Well, the lizards are abundant today and Helen saw one looking very pregnant. So the snake has not been able to predate all her wonderful lizards. But if a snake were resident, it would feast well.

We are both very familiar with red-bellied black snakes, and we agree with the Australian Museum which advises:


This beautiful serpent shares our love of sunshine and water, and is a familiar sight to many outdoor adventurers in eastern Australia. Attitudes towards these largely inoffensive snakes are slowly changing, however they are still often seen as a dangerous menace and unjustly persecuted.

On the farm, the startled black snake hastens away towards water. And you talk to the dog and distract it away from seeing the snake.

In suburbia, the situation is more complex. Fences trap and may make it hard for a snake to flee, dogs may get too adventurous. We have told the neighbours who have children and a young Jack Russell Terrier about the snake. The terrier is the one likely to be silly.

The Australian Museum also advises that:


During the spring breeding season males actively search for females and consequently spend more time in the open and travel further than females generally do (up to 1220m in a single day). As the breeding season winds down males reduce their activity and by summer there is no significant difference between males and females in the amount of time spent in the open, either basking or moving, and both sexes bask less and become less active than they were in spring.

So it's possible the snake was passing through and took exception to our use of cold water and our voices, heading on up the hill. There is a metal fence on three sides of the garden, uphill, but perhaps the snake could happily climb via trees and passionfruit vines to get over the fence.

The Medical Journal of Australia has some 2010 clinical notes on black snake bites. Which provide comfort that the bite is not lethal. There is a recommendation for use of tiger snake antivenom, but disconcerting advice that more than a third of patients administered the antivenom have severe allergic reactions including anaphylaxis in some cases.

Meanwhile we will depart a little from Teddy Roosevelt's admonition to speak softly and carry a big stick, walking noisily in the garden so the snake knows we are there and moves on. We carry the long-handled weed tool, wearing solid footwear and thick trousers. And rejoice a little at this added complexity, but hoping it will depart for somewhere more sensible soon.

Posted by Dennis Argall at 6:16 PM