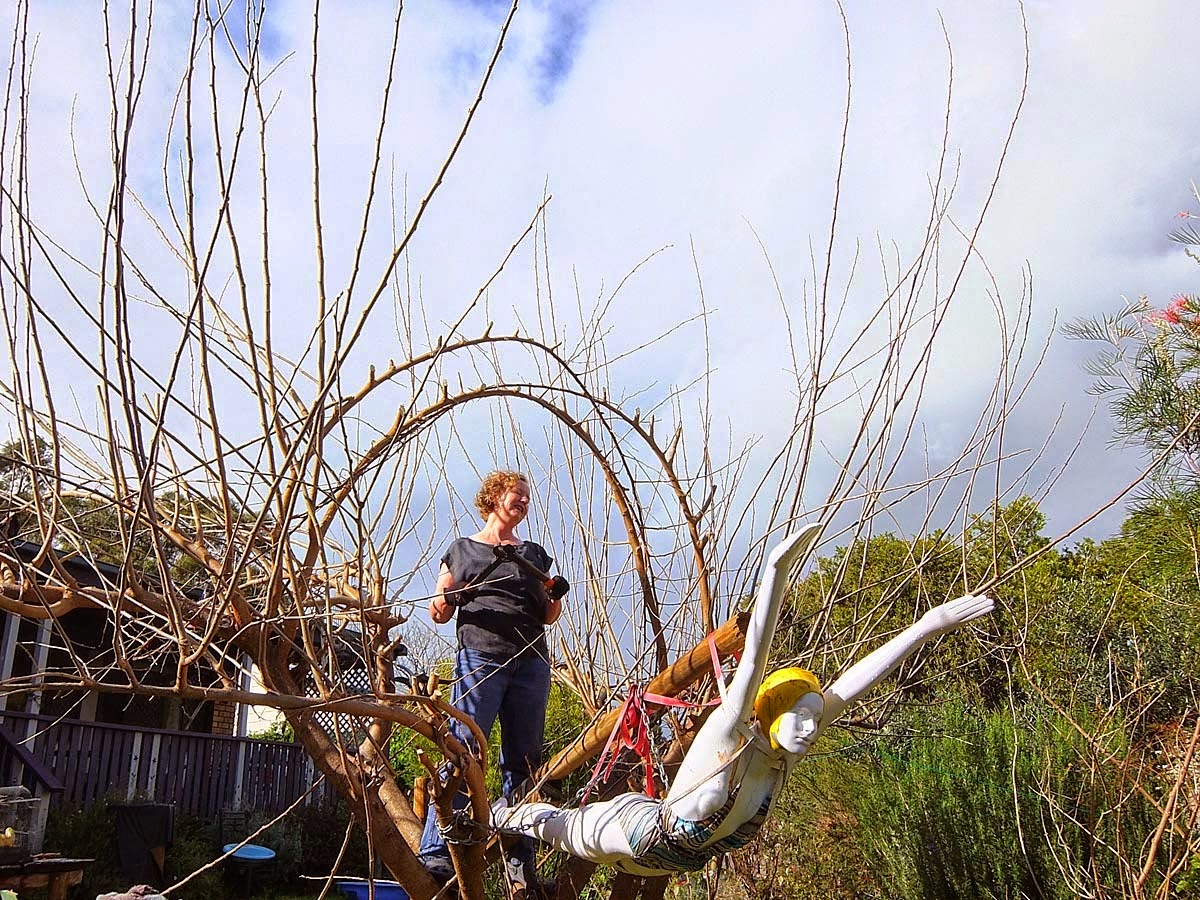 Only a few weeks ago, Helen was up in the mulberry, artfully crafting the launch tube for the Queen of Freedom. 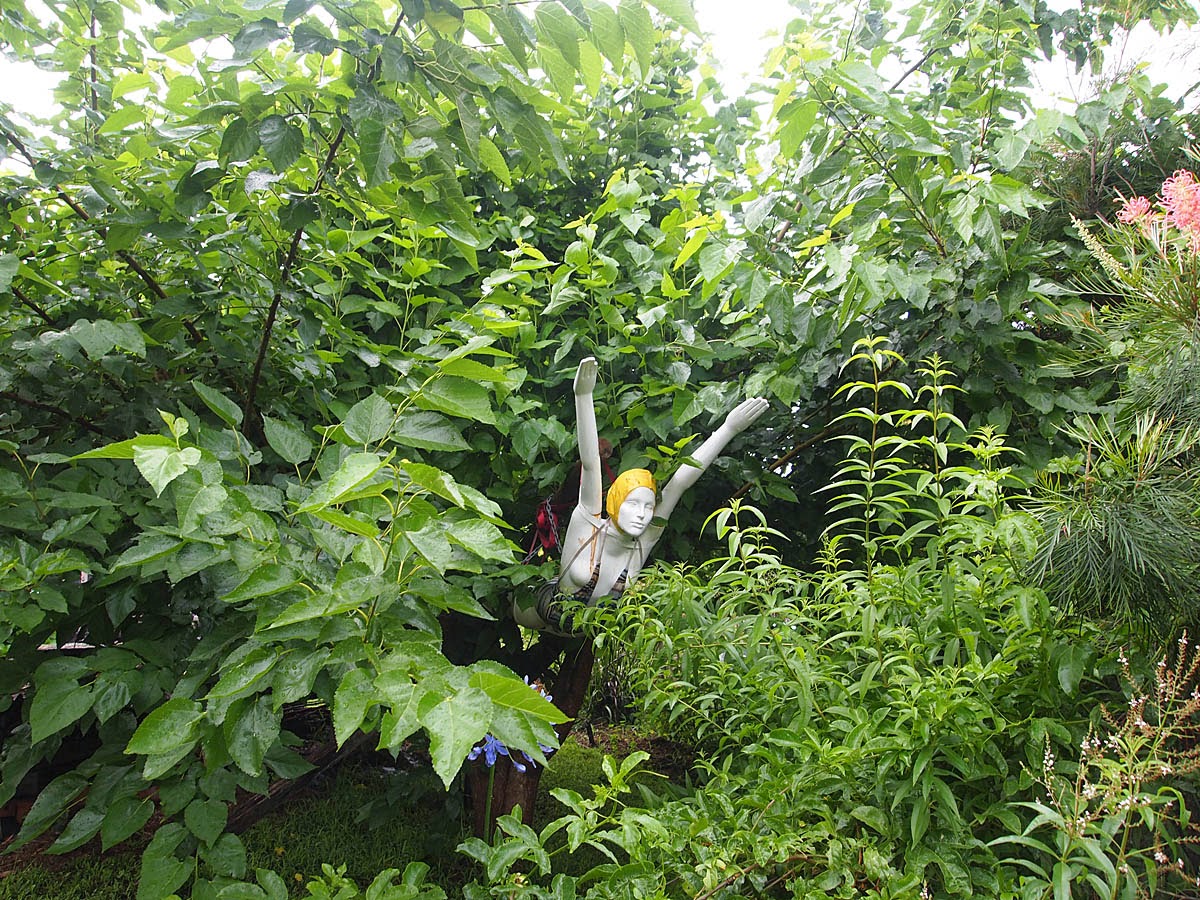 but a few weeks later the artful craftiness has been swallowed by spring growth.


There are several lessons and learnings: 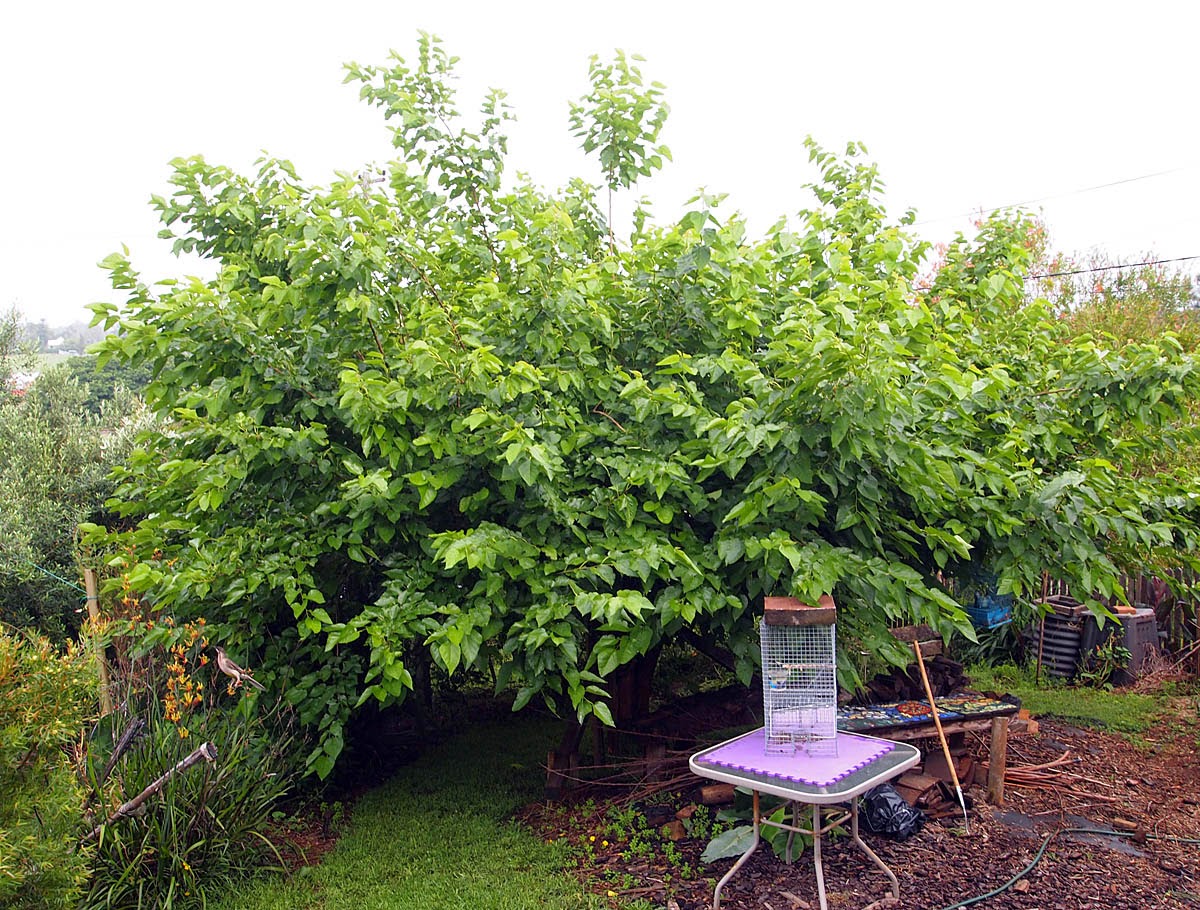 DETAIL: In the third photo, you will also see a trap to catch Indian Myna birds. The problem is discussed here, in a 2004 report. The problem has grown since then. This YouTube link is to a discussion of how a cage (of slightly different design) works. We have a problem with getting Mynas into this cage. While a lot of mynas come round, especially when there are chickens here and expectation of stealing chicken feed, the dominant bird at Helen's house is the vicious pied currawong. To get Myna birds into the trap we put dried dog food in the  entrance. While the currawong is boss of the garden, no one gets to the dog food before the currawong. They have no concern for mynas going for chicken food, the currawongs are meat eaters.

Helen's garden is sloping. The soil is rich dark red, volcanic. This is a contrast to the soil at my place, which is shallow and sits on top of a sandstone plateau, through which water is easily lost... mulch and development of a depth of good humus soil requires work. At Helen's place, this single dig with a fork reveals a very different, richer soil: 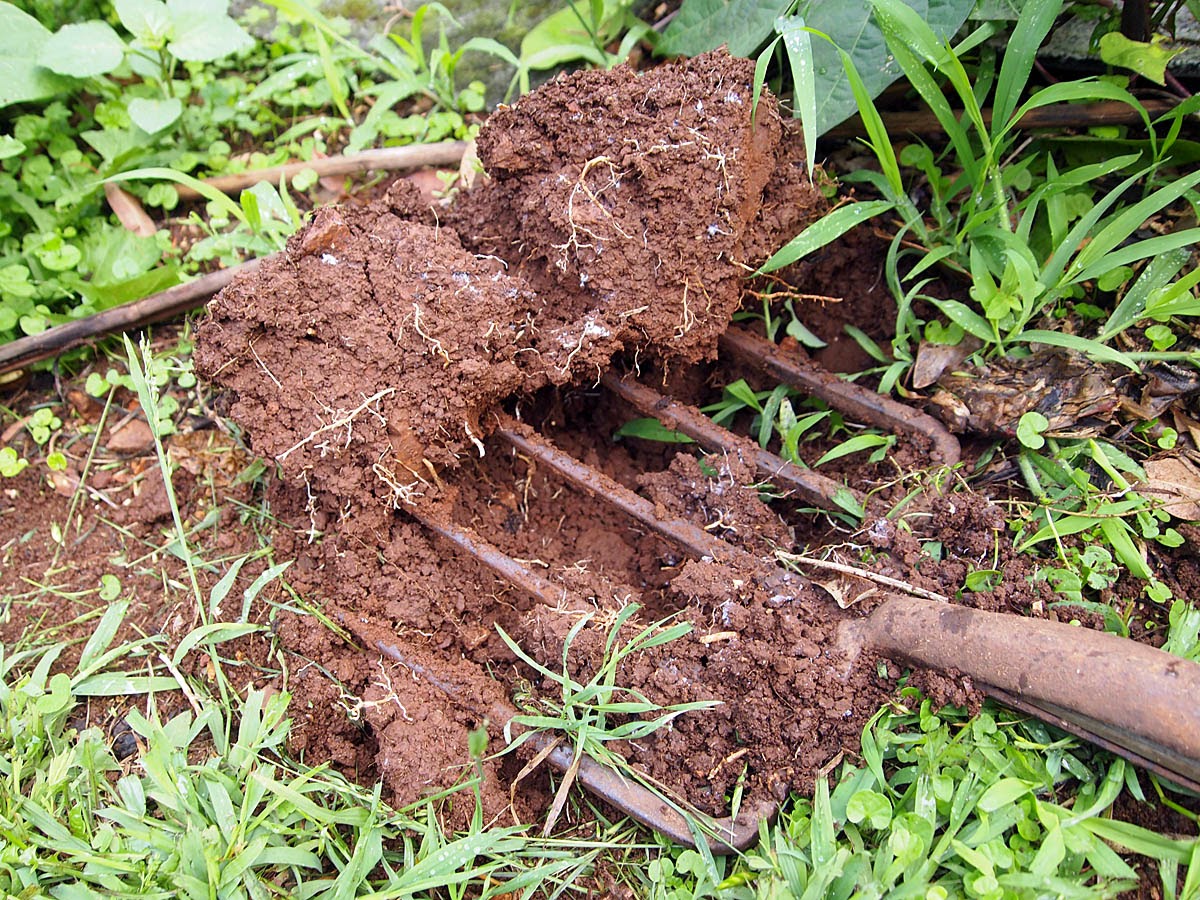 Which makes everything flourish. 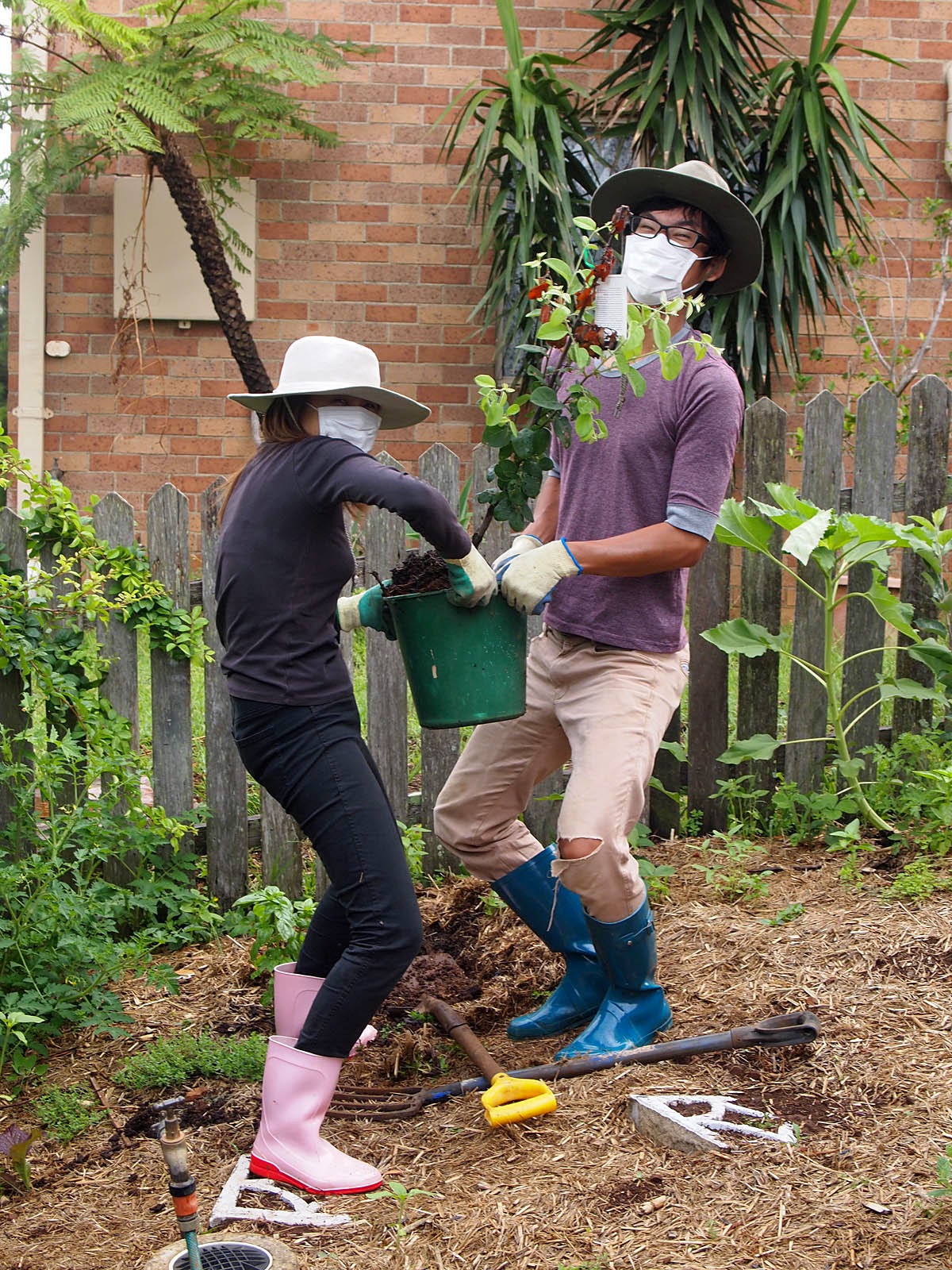 Helen's garden is packed with plants.

With the addition this morning of two guavas and a kiwiberry, Helen advises that the fairly small garden now contains 31 fruit trees, bushes and vines, plus a macadamia nut which has its first small crop evident now.

For the rest there are many herbs and vegetables, seedling trays and a chook house and run (the beach house of the chooks shown at my place, previous story. They need to come to Helen's soon to give their space at my house a rest.

Help today in planting (and shifting locations of a blood orange and a quince because of their sun needs) from Japanese WWOOFers Kanna and Daisuke, ballet dancer/model and engineering graduate... so well equipped!

For the rest of this entry, a quick walk around: 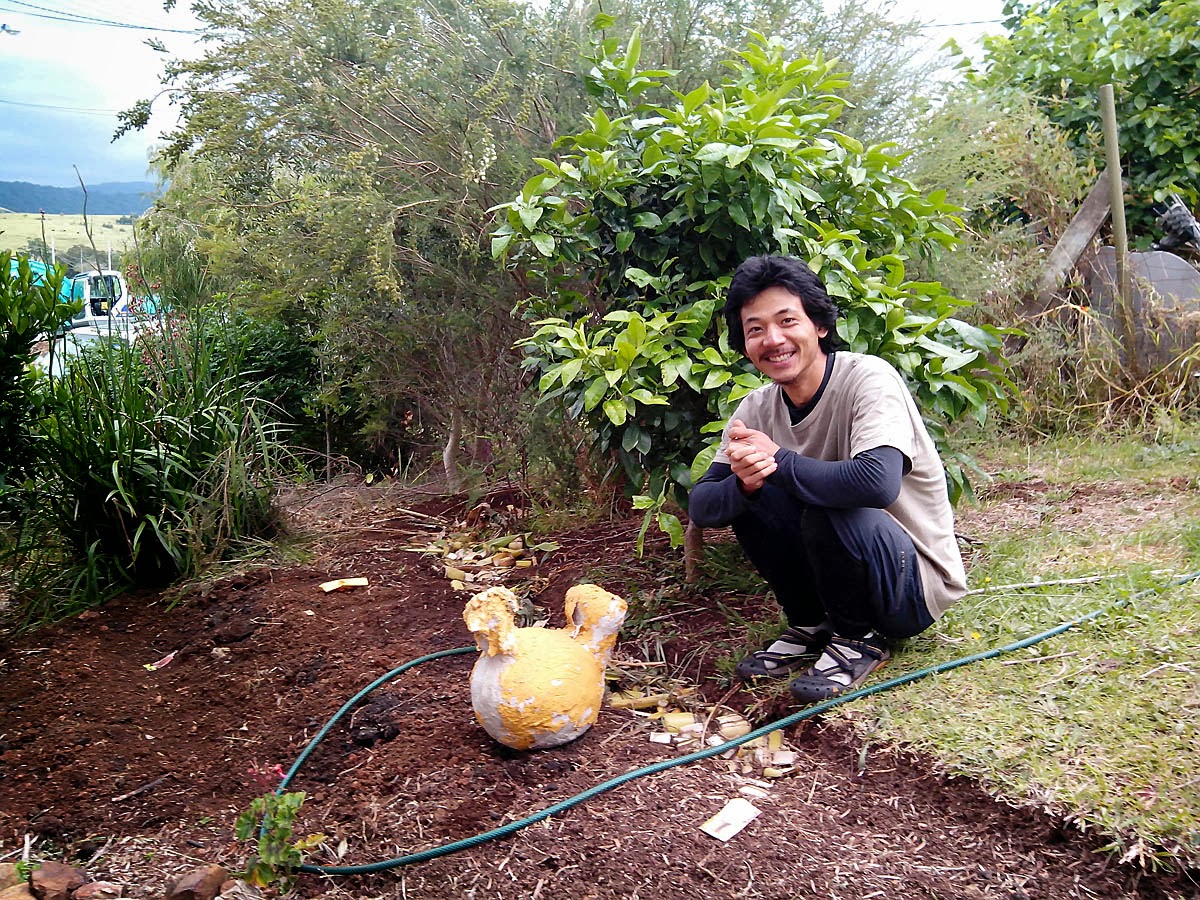 This garden above, beside the steep driveway, has begun to thrive since, with the help of WWOOFer Tatsuya we built a swale in January.


Water previously just ran away. Now it enters the ground up there below the (grown larger) grapefruit and is retained in the soil below.

The swale is very simple. Most discussion online is about huge swales. But micromanagement of water is very easy.
Rules 1-10:Get the water under the ground! There is no Rule 11.
Here is a photo from January. 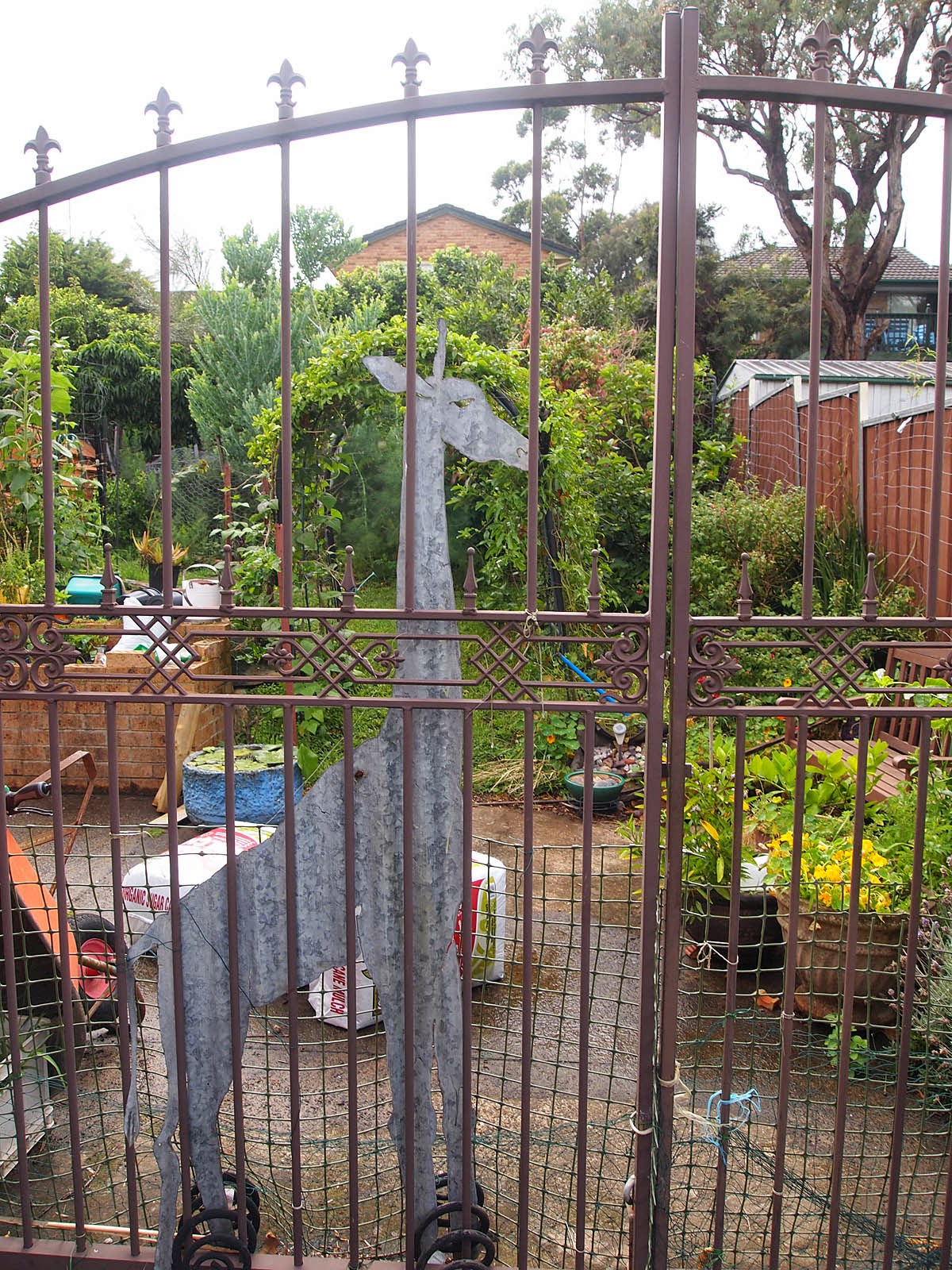 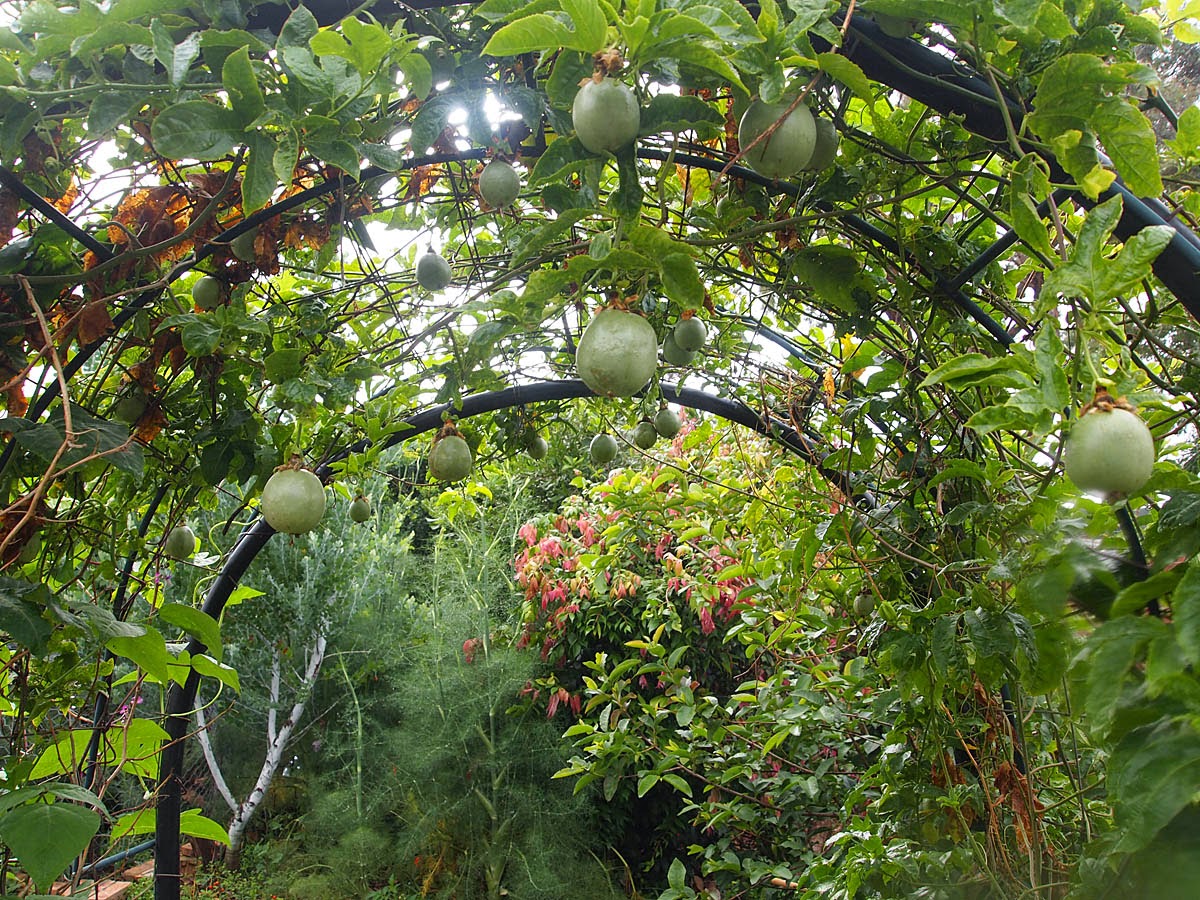 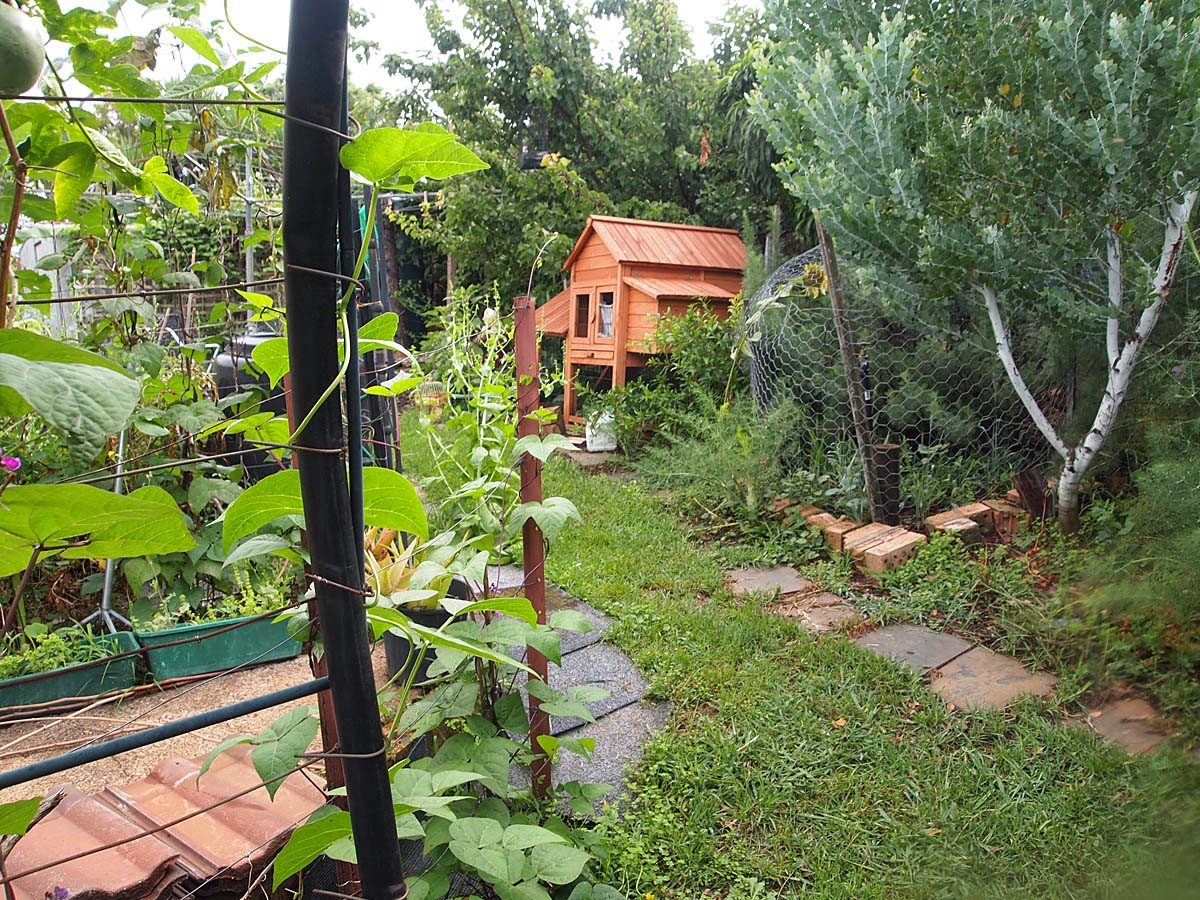 Because the house is cut into a slope, there is an area of concrete and a brick wall embankment behind the house, imposing on design, but whose severity of look is reduced by plant vigour. 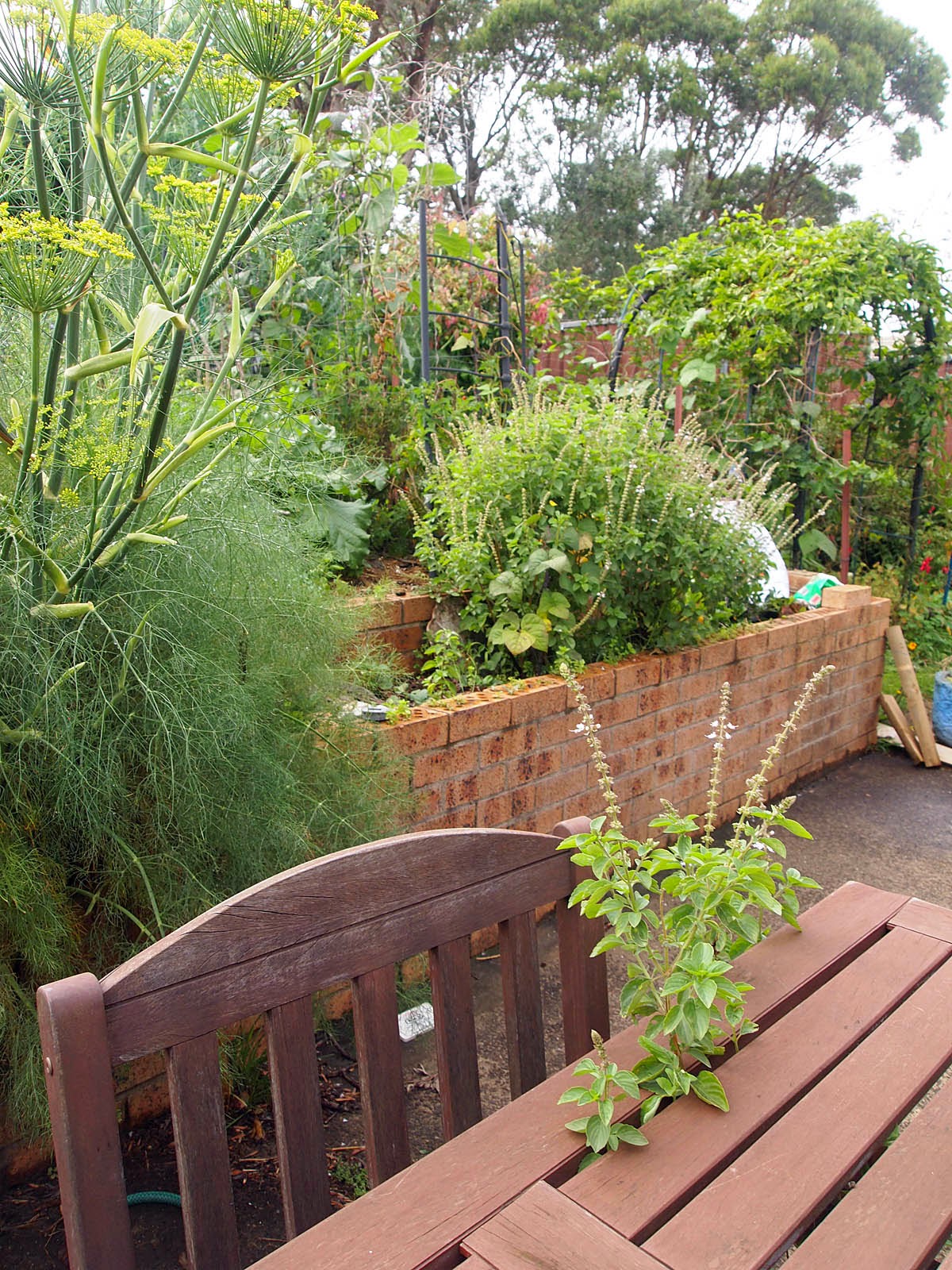 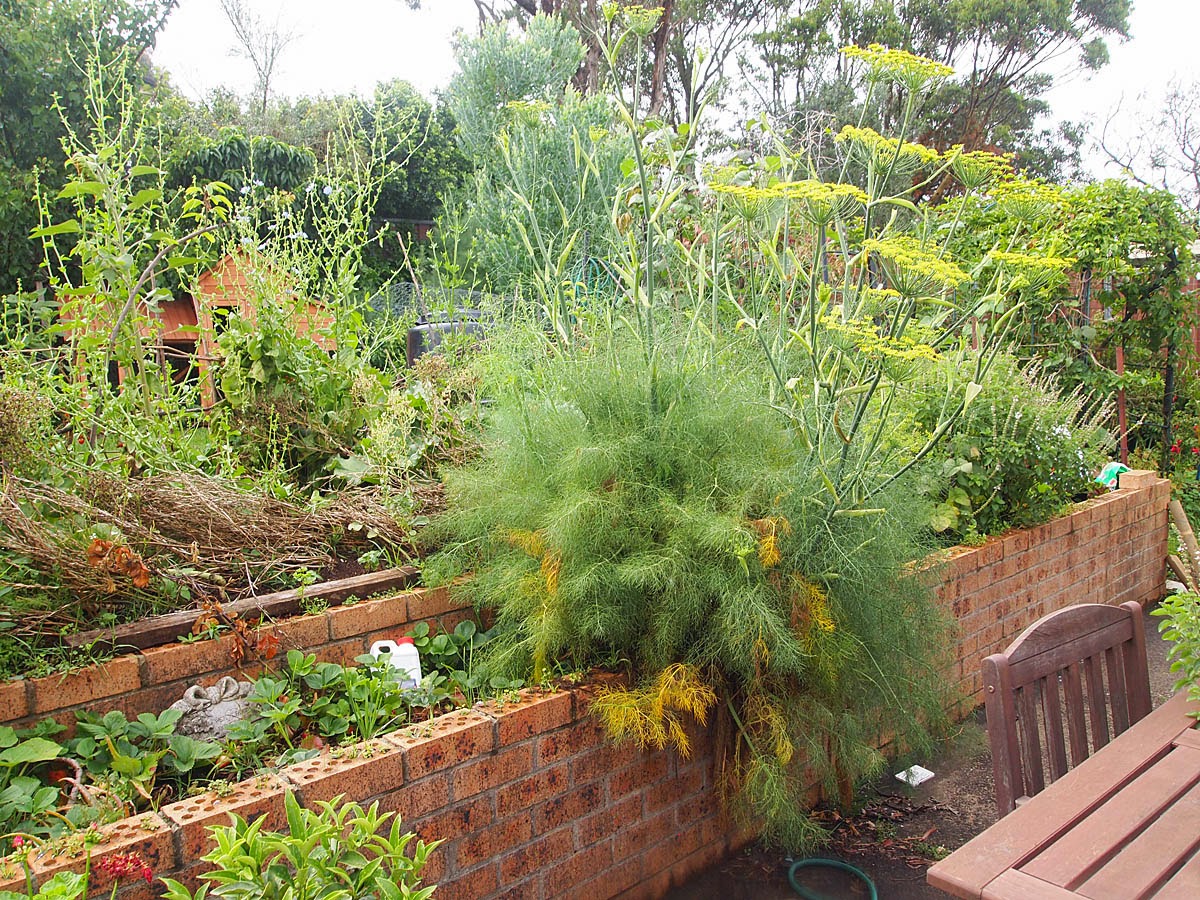 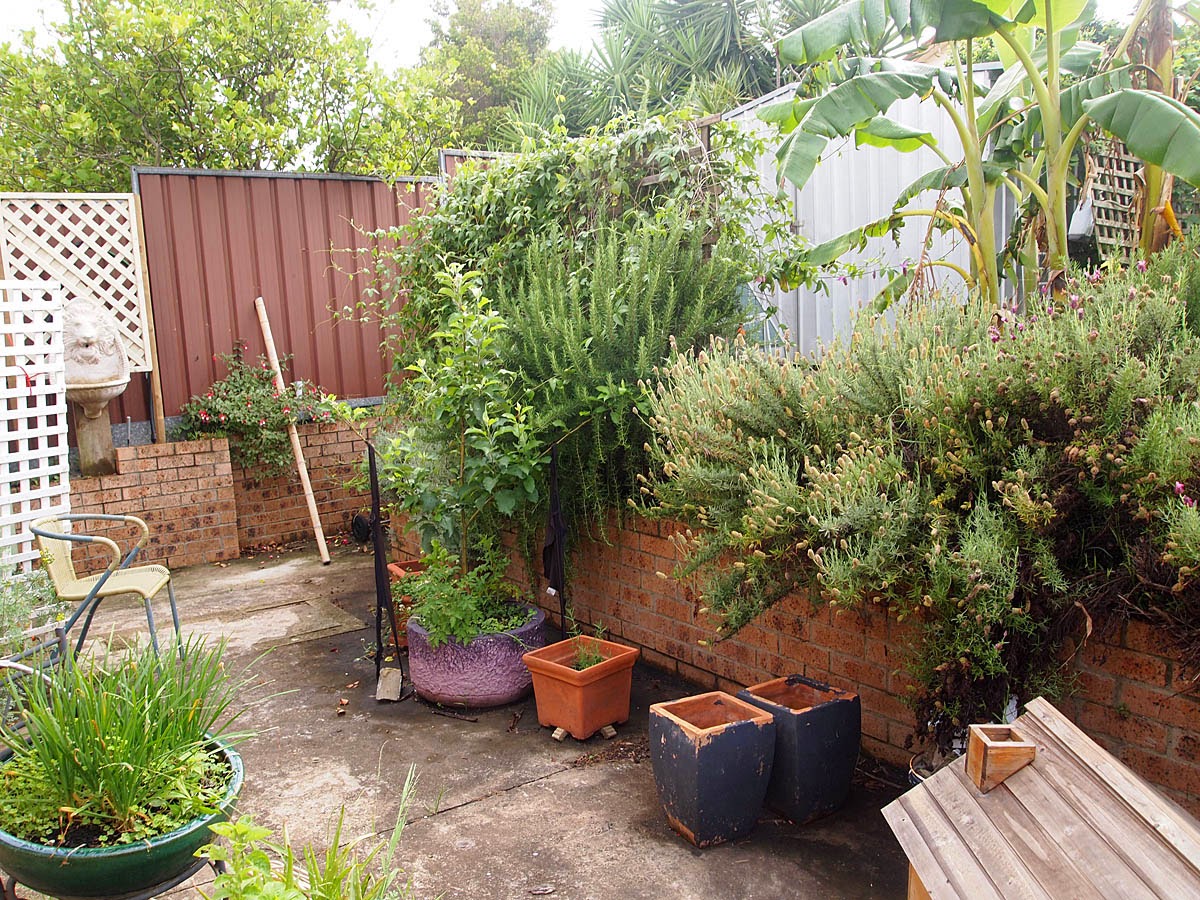