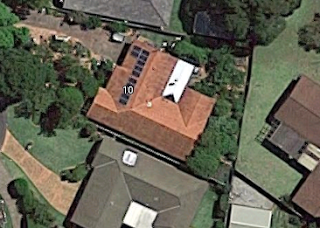 We occupy a suburban lot, of a size conventional around here in about 1990. In the satellite view, we are seen to have more tree cover than most neighbours. We have the red roof, with solar panels. The massive tree in the garden to the north is a eucalypt, remorselessly growing and increasingly over shading our back garden in winter when the sun angles in from the north (we are in the southern hemisphere). An issue in this country is vulnerability to fire in areas of bushland. Fire is an especially serious risk in forests with high oil content, such as our eucalypt forests or pine forests in California. Our suburban food forest is of trees more likely to be fire retardand.

Just outside the white roof coloured back veranda space is a shock of green colour. A couple of years ago I had planted a reluctant seedling passionfruit, something that emerged from a friend's compost. Then I moved the chicken run, just two hens, to that area.
The single passionfruit vine, visible from outer space, the big green blob, overshadows much of the chook run, providing hundred of fruit per year. But these vines only live a few years. So the most important important thing in a food-productive garden is the planning of succession. What to grow for how long, what to succeed what? When to plant new passionfruit, to ensure that when one dies, others will be near fruiting maturity. How to allow for the fact that not all things planted, not all thrive... and at the other end of the spectrum, the problem that the very very happy plant may not feel the urge to reproduce, to produce fruit and seeds. In ortobiologicale vernacular Italian, such a plant may be called a vagabondo and a farmer might bash the tree with a hammer to scare it into reproduction.
In a modern office, serious people might draw Gantt charts to decide what needs to be done in what order. In my permaculture garden, there is more the task of saying "where the hell is there some space for this?" but with an eye for sun and shadow, for neighbouring plants and the way they will grow.
I recently planted in the backyard a yellow guava, a nashi pear and a tamarillo near each other. In a suntrap. Adjacent to a non-fruitful peach that in summer is allowed to protect a north facing window. The tamarillo is very close to the guava, but will race past it, overshadow it, for several years, and then die. The guava can be pruned to something of a delicious hedge beside a path. The nashi - a nijisseiki, or Twentieth Century Nashi - is a dwarf tree, fruit will remain within hand reach and will be relatively easy to check for pests. There is long historical agreement that the footsteps or the shadow of the farmer is the best fertiliser.

That long prologue is a way into saying that an inventory of a garden is an inventory of the impermanent, of the constant changing, the hugely pleasant place of surprises. And an inventory of the food productive plants in the garden is a terribly diminished perspective in a garden filled with other plants which are there for the eye and the spirit and the birds and bees, without which no fruit. And much less pleasure.

Anyway, let's get to lists

Front garden, intense sun, high winds at times, history as clapped out dairy pasture, weak soil on hard pan caused probably by superphosphate use and heavy bovine traffic, underlain by hundreds of feet of fast draining sandstone and conglomerate. I add volcanic rock dust, manures, compost teas, compost, mulch and trace elements and with old pvc or terracotta pipe lengths do much of the watering direct to a foot or more underground, with some of the manure and rock dust in the pipe for solution.

Back garden, more inspected and worked than front garden, some valuable heat trap areas. Soil improves faster. Hens on a length of the boundary, reducing snail and other unwanted presences. Some areas more shaded for part of the day.