From early April to early July there was magical preoccupation with bowerbirds outside our bedroom window.

and I installed a movement sensitive camera and built a blog, sample here, but all at link.

But as seems to happen often the bower and Odimbar its boss are gone. Perhaps standard rivalry, perhaps also finally finally as temperatures fell and the autumn lovely weather yielded to far-to-early winds of September, come fresh-chilled from the highlands, Odimbar may have just said "this is ridiculous!" But as per regular, the bower is smashed into the ground and other birds have stolen his blue treasures. 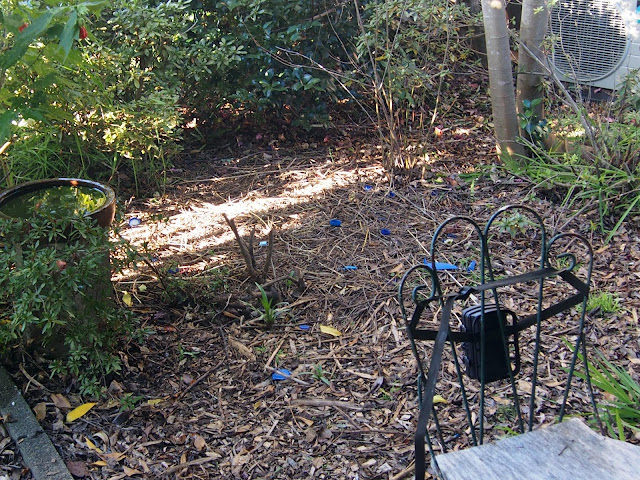 I have left that camera there and will check it so we can see the random mooching of winter and the beginning of rites of spring, should this shady nook be again favoured with bowerbird presence.

Meanwhile this morning after 8am I have been out and done a quick inventory.

At the front door the ladies are still in charge, though one seems (perhaps consequence of being inadequately dressed, pretty baubles hardly suffice) to have caught cold and the other seems to be concerned about the pig getting away. 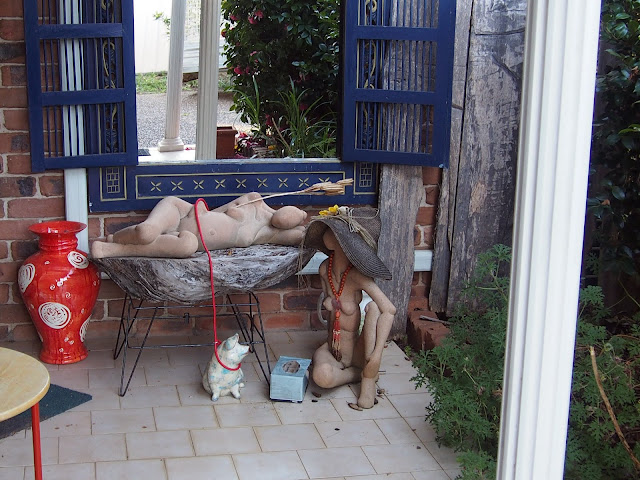 With Renay the gardener I have done a lot of winter trimming, the garden looks hard cut in places but it will riot in spring. We have water, are proofed against an alarming sudden drought, total dryness on southeastern Australia this past month, El Niño back with a vengeance.

From the kitchen, looking towards the rising sun, the view is industrial

The garden is crowded, it's an interesting walk but difficult to photograph (at least for me).

A surprise in the heat of the summer was the appearance of a pawpaw (or papaya) from a hole near the bottom of the black compost bin. We first expanded the hole and subsequently took the bin away, covered the compost with black plastic and left the pawpaw to grow. Over 2 metres in five months. And with several flowers last week. But a frost two nights ago. Which has killed most leaves, new leaves seem to be surviving. If it gets through the cold and wind of this winter it should be tall enough next year. The compost heap under black plastic provides some soil warmth.

The Gymea Lily was a 15cm high gift in 2008 when the garden was a desert. It is now just a bunch of pointies almost 2 metres high. It illustrates the way gardens grow and change. There should be no notion of a static garden.

Here are photos of a Gymea lilies in bloom, courtesy of the National Botanical Gardens in Canberra.

Plainly the garden is going to have to make adjustments as the Gymea lily grows.

As the map shows, this plant has a very limited range. Near here it makes, with its very tall flowers, an unusual planting for the middle of the highway.

In this photo below, looking into the morning sunlight, see the black plastic, held down by white concrete breeze blocks, at the foot of the pawpaw. The Gymea Lily alongside. The fig tree has been pruned very hard, it grows back vigorously. 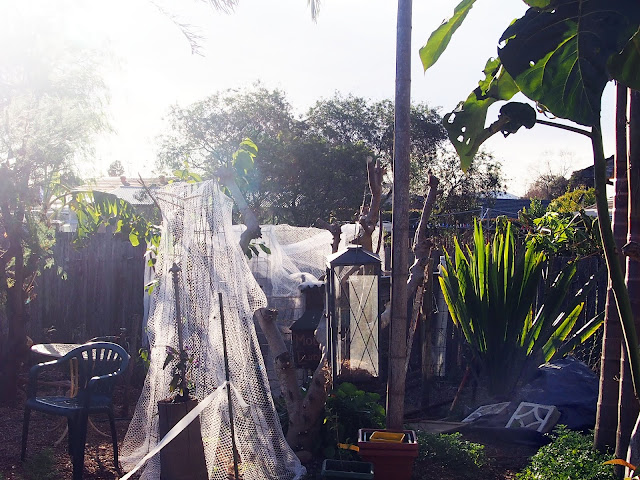 This next picture shows the 'floor' of the cafe mulched in part with purchased eucalyptus chip (dark colour) and partly with chipped fig, wattle and mandarin (the light and dark chips).

There is also a view of my (so far successful) efforts to 'graft' a Hardenbergia violacea onto the stump of a Bangalow Palm. We have two such palms thriving, the third caused too much shade. Again this is something that is decided as the garden evolves. See the (marginally) elegant fleur de lis climbing pole for this handsome native legume. See also lurking a piece of 3/4" polypipe stuck deep in the soil to provide water down low in the root zone, to draw the roots swiftly to the ground. Nitrogen-fixing plants (legumes and acacias) to be put in everywhere possible. In the rear of the photo in front of the lattice is a wattle. This has been savagely pruned every year, multiple times. It survives. Wattles (Australia's plant emblem) are acacias, like legumes they have bacterial nodules on their roots which 'fix' nitrogen from the air, making it available to plant roots. They differ from legumes in that legumes tend to lower soil pH whereas acacia raise pH, valuable in Australia where most soils are ancient, or overworked, and acid. This savagely treated wattle, when pruned, also suffers death to roots, which makes both carbon and nitrogen available to the soil along with the humic virtues of decomposition. Its roots grow as fast as its branches – it is a deep plough. Its pruned branches, put through the mulcher or used in hugel beds, are quick rotting and nitrogenous.

The netting covers newly-planted lettuce, also bean and pea seeds in there to grow on the frame supporting the net. 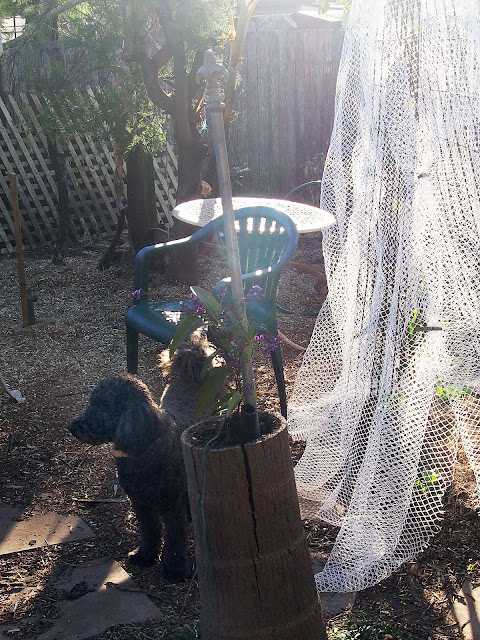 In the next photo below you can see, as Ralph and the bear can see, the lattice no longer has clothes. There was hitherto a 20 metre spread of a single passionfruit plant dense heavy foliage, as also there was a home for chooks (chickens) right there below the bear. We have moved the hens to a fresh location (good for them, good for the soil) also clearing space for fence repair/replacement. Passionfruit plants must be replaced every three or four years. This is another evolving thing in the garden – where to start a new passionfruit vine when the current one is thriving... Meanwhile we have more sun and fresh perspectives. And a cafe space.

You can see (below) the black compost bin in a new location. We are adopting a new practice, Renay's practice, of not emptying the bin but moving the structure to a new location, leaving compost in place (covered with black plastic while breakdown is finished). You can see a green wire device hanging to the left of the compost. This has a corkscrew end. It is very valuable for aerating the compost, preventing lower levels from becoming anaerobic. A good aerobic compost (with air access) smells sweet. Anaerobic (no air access) compost has a smell, well, we all produce anaerobic substances from our guts. Sun on the black plastic is important. Unpleasant bacteria (and weed seeds) will be killed if the contents of the bin get to more than about 50 degrees celsius. You can see some remnants of passionfruit in the mesh beside the bear. The bear is looking down upon a miniature Eureka Lemon newly planted and tip pruned to encourage growth. The lemon is planted into the top of a hugel bed which contains logs of wattle, vine of passionfruit, bags of horse manure and stable mulch, several buckets of soil, plus additives. In making a mound like this, it is important to water everything in well, eliminating air gaps. The bed will collapse to near ground level through next summer, converting to good humus. The lemon will be espaliered along the mesh. The mesh runs east-west. The other side of the tree is north facing (sun-facing here in the southern temperate zone). Eureka the lemon of choice because it produces fruit for almost the whole year. The location is 15 seconds from the kitchen.. design, design, design :-)

The nutrients in the mound are:
• horse manure (not very balanced, really better if composted);
• dolomite (adjustment of pH, ensuring magnesium as well as calcium)
• Dinofert
• volcanic rock dust. We are here on worn out thin old dairy farm soil, sitting on hundreds of feet of sandstone and conglomerate. The volcanic rock dust does not give us volcanic soil but provides many nutrients found in volcanic soils.

I wrote just there 'not very balanced'. The greatest balancing of soil is achieved by composting processes and the development of humus. That is the basic objective in this hugel bed. A slow composting, not hot and fast. 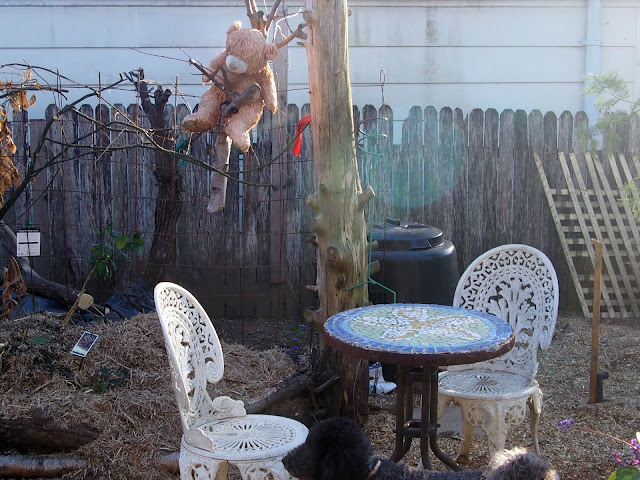