The spring is sprung, the grass is riz.
I wonder where the boidie is.
They say the boidie’s on the wing.
But that’s absoid. The wing is on the bird. [Anon]

Well, the birds are about in the garden, have been for some time. But the grass is almost eliminated, except a little at the front so the postman can make deliveries without injury and a little under the clothes line. For the rest and after lots of effort, more by Renay the gardener than myself, the grass is almost entirely eliminated.
Here is the morning view from bedroom. There is a strange tradition in Australian housing that [a] you put the so called master bedroom at the front and [b] you have a cleared, grassy front yard... which together [c] leads to the practice of keeping bedroom curtains closed for privacy. We have a different situation:
We have had a continuing muddle of warm-cold-mainly dry but in recent days good soft rain. Two days ago, this view from the back of the house in the afternoon.
Last summer was difficult with severe health problems and severe weather. We have a good situation of control at the beginning of the growing season now.

Oranges and limes are in bloom, the Lisbon lemon continues its virtual year round production of fruit.

Young tamarillos jump up to replace those several years old which have given up — several were fried by fierce heat early in the year. Passionfruit are resting after many months of crops, having delivered us to a point of passionfruit satiation. Interesting how taste can move with season.
We've trimmed the biggest passionfruit vine, may need to be more radical. Passionfruit vines only last a few years. We await asparagus, may need to fence the chickens away from their ground, which they have well fertilised.

I'm very pleased with this little raised bed. I've just harvested some spinach and some garlic shoots for sushi. I have to share the spinach with some of the birds, but the garlic shoots are what has become of some cloves of garlic that sprouted in the fridge. For success with growing garlic, it's good to keep it in the fridge because it needs a period of cool to shoot. I could leave it growing in the ground and then harvest the heads when tops die back, but in the meantime the shoots have the sharpness of garlic with a freshness absent from the conventional item.

The mini-rainforest and little torii (which holds up the unbalanced tree) behind the house are providing a comfortable edge to sitting out for breakfast in spring sunshine at the eastern end of the house. 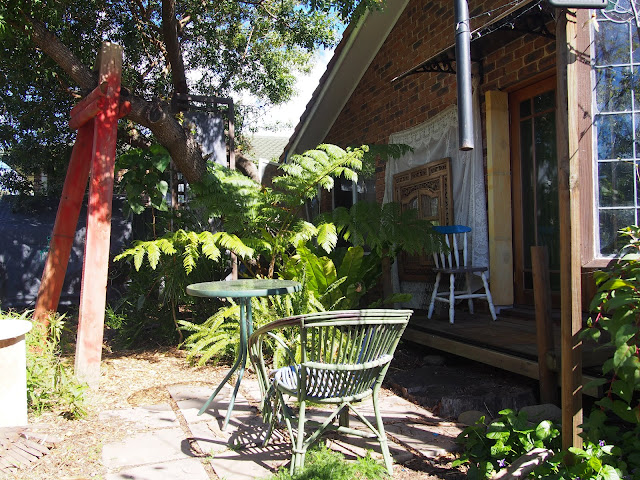 Posted by Dennis Argall at 1:05 PM